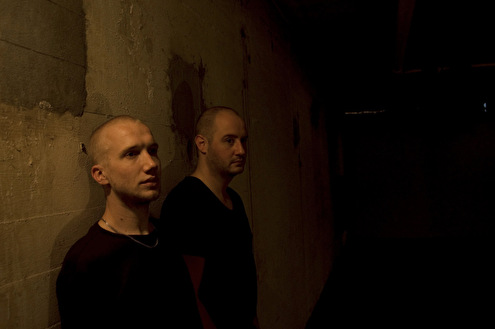 With only a computer at their disposal, the tracker scene gave them a broad and extensive creative output. One which they quickly used to its full potential. So when Enzyme Records finally heard their demo back in 2004 the official debut was a fact. Titled 'Deus ex machina' Mindustries delivered a set of tracks which resulted in a unique impact into the scene. Difficult to place under a fixed style or genre, the percussion driven experiments displayed a danceable yet dark ambiance. Since then Mindustries has released various EPs and tracks through Enzyme Records. Also producing under the mysterious Enzyme X alias, Mindustries has evolved their music into a rhythmic powerhouse. Hard and distorted, driven by techno energy and an industrial grind.

The co-production 'Forever is a long time coming' with The Outside Agency opened up the Genosha door to Nils and Yuri. Feeling right at home from the start, work continued on a batch of brand new material. With a dive deep into their studio gear a more mature and finished sound was delivered, the result: 2009's 'Born of revelation' EP featuring four brand new tracks. Marked by a sharper mix and enhanced audio dynamics, their second EP on Genosha Recordings was a fact.

Mindustries has evolved their sound ever since, a reflection of their open minded attitude. Mixing the darker industrial sets with the occasional early flashback and acid sidestep, Yuri and Nils are a force in the studio as well as behind the decks. Their typical hardcore sound transforms from speaker to crowd, with a non-stop occupation of loud and clear-cut beats ready to take over........keeping the experiment flowing.