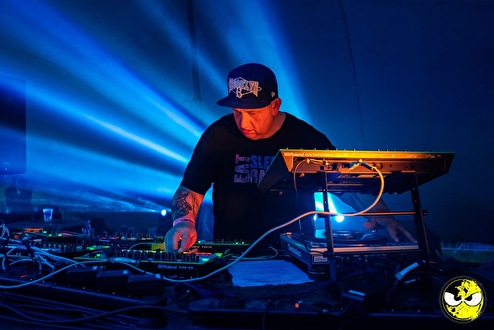 BONZAI
Franky Jones was also one of the driving forces behind the illustrious legendary BONZAI label, wich helped shape the face of the Belgium dance culture known as TSOB (the sound of belgium). In 1992 he produced his first track for Bonzai under the name Jones & Stephenson "The First Rebirth" wich became an instant MAYHEM and till today after 25 years the track is played every weekend all over the world destroying dancefloors on raves, festivals and clubs. Today The First Rebirth has the worldwide status of BEST CLASSIC RAVE track ever !!

LABELS
Franky is also the founder of the TRIPOMATIC, BUDDJA and ENTERPRISE labels. Again he was the first in his country to start a GOA Trance label called BUDDJA. Hugh fans playing and supporting the label where PAUL OAKENFOLD (that time Best DJ in the world) and MARK SPOON (rip) from JAM & SPOON. The double compilation album TRANCIDELIA (cd & vinyl) are big wanted collectors items selling on DISCOGS for big prices. The TRIPOMATIC label was all about deep dark long techno trips and was soon after the first releases the hottest wanted underground label in LONDON. DJ's were weekly hunting the shops for new Tripomatic vinyls. The typical record sleeves full of acidtrips was spotted in a UK ganster movie about the nightlife and then the label exploded with a UK and GERMAN TRIPOMATIC division after i signed the first NR 1 chart seller METHADON "Synthetic Fruits". The AFTER-HOUR compilations on the label are hugh wanted collectors items.

AWARDS
In 1995 Franky was voted BEST VISITING INTERNATIONAL DJ by the readers of ETERNITY magazine during THE IRISH DANCE AWARDS in N.IRELAND after his first visit that year to the country playing @ KELLY'S NITECLUB (Portrush) what went straight in the History books of Irish nightlife.The combination of Guinnes, Whiskey, Tablets (doves) and Franky Jones hardtrance sound was a deadly combination. Young girls poping E's by the minute with pints of Guinnes larger then you can think where dropping flat out everywhere on the floor and bouncers where pulling body's like dead cow's outside in a field full of flowers. Club was on a big camping site. After his set he go out and found a field with hundreds of young girls (age around 17) laying in the grass half naked, totally wasted lauching and singing "We Love You Franky ..... O Fraaaaanky" ... he still think "what the fuck i just saw" Also voted BEST BELGIUM DJ 1997 & 1998 by the readers of MOVE-X magazine and was not allowed to enter again in 1999 because the readers voted again almost 100% only for this incredible artist. Later that year the magazine published an article about the First Living DJ Legend in our small country Belgium ....

BANGTRAXX
Franky Jones continues to release quality underground music. The last few years doing that on his digital Acid Techno label BANGTRAXX. Just on his own tempo with no stress and mostly own tracks with remixes from artists he like. A few friend releases where done also spreading the 303 sound worldwide. The last few months i had releases from ROBERTO CAVAILLEZ "Time Out/ Acidminik", JACIDOREX "NeoAcid Ep" and FRANKY JONES "Addiction Ep" what was made for the ACID ADDICTION party's in Petrol (Antwerp) where i am the resident DJ for the last 3 years. This ADDICTION EP is getting a limited coloured vinyl release (BANG 01) with 1 extra track more then the digital release. I also had the first 2 digital label compilations: BANGTRAXX "Chapter 1 & 2" feat tracks from the first years. They sold really good on the iTUNES TOP 200 dance charts. Chapter 1 came on place Nr 32 in PERU and Chapter 2 came on place Nr 9 in Belgium of best selling dance compilations during the holidays. That was a nice surprise. May your CHRISTMAS be happy
and right from the start,
may the NEW YEAR bring all that is
dear to your heart!!!