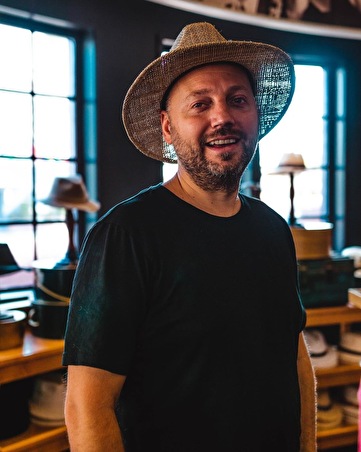 Born in 1979, the story of Ajdin Begovic far exceeds musical manifestation. As a Bosnian native, the Yugoslav Civil War proved an insatiable battleground of social and physical preservation to what should have been his tender teenage years. Through the suffering, imprisonment, loss of loved ones and his eventual release from a detention camp in 1992, his earliest tests and tribulations have served as considerable drivers to the leaps and bounds now associated with his global overhaul. Times have changed. Social landmarks have come and gone. Armed only with the haunting memories of his earlier tribulations, Baggi's club deviance has been modestly tailored, yet wholeheartedly executed to make relevant marks on the modern market.

As an industrious playground, few could argue the positive legwork made by Baggi upon his relocation to Rotterdam. Away from the constant reminders of political unrest, Baggi would staple himself amid the thriving Netherland's circuit, immersing himself among such long serving peers as Funkerman, Hardsoul and Rene Amesz – the latter of whom he would top the progressive house charts alongside for "Smells Like Teen Spirit." With a back catalogue including collaborative duties alongside Erick Morillo, Roger Sanchez and a strong presence on Defected Record's Ibiza 09 compilation, there is no shortage of indicators of Baggi's preserved musical aptitude.

Call it house music, EDM, or assorted Begovic charm, but this is one artist whose ever-expansive studio arsenal knows no limitations but upfront quality. A tropical groove-master by inauguration whose stints for Musical Freedom, Defected Records, Toolroom Records and Spinnin Records alike broke incessant momentum across the industry, modern times are yet to hinder his eclectic get-up. More recently, remixes for Rita Ora, Kelly Clarkson and Rod Stewart have underpinned his unwillingness to shy from the ever-expanding boundaries of popular music; yet another asset that has kept him in consistent visibility amid his craft's undeniable renaissance.

But for the most part, Baggi remains as relevant and club-footed as ever for 2013. Tiësto, a long time provocateur and advocate of Baggi's pursuit of solo stardom, has played a considerable part in this full-circle of musical liberation. Dropping his debut single for Musical Freedom exactly 21-years after losing his father to the atrocities of war, their new found collaborative partnership – as formally celebrated during Tiësto's set at UMF, signals a liberating streak for Baggi and his accomplished studio persona.

Trends have taken wind, but the well-travelled artists buoyancy on the global club circuit remains evident in the sheer scope of his global presence. Between landmark stints at Mysteryland, Global Gathering, Creamfields and Space Ibiza, Baggi's studio output and fluid turntable maneuvers continue to cater for every facet of club land without compromising on the quality that has kept the air miles racking up throughout his whirlwind career.

Baggi's story has not always been one of plain sailing, but through music, the chimes of liberation have offered considerable redemption. Taking 2013 like a man driven only to excel the ranks of his craft, one thing remains painfully evident where the long serving Bosnian talent is concerned: music is an outright liberator when placed in heartfelt hands.