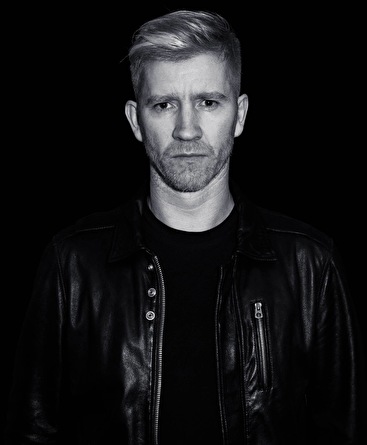 Armin Van Buuren.
David is one of the most diverse and consistent producers out there. That's a rare find these days.

Starting his career in the early Electronic music days David's experience and knowledge of the industry is unparalleled and this has resulted in him producing in a multitude of styles and there hasn't been a label that his Midas productions haven't graced over the years with releases on the scene's most respected labels – Subliminal, Vandit, Spinnin', Reset, Liquid, Doorn, Anjunabeats, Flashover, Captivating Sounds, AVA, Coldharbour, S107, 68Recordings, Black Hole, Universal, Whoop, Five AM, Eve and Noom records to name just a few.

David's Productions have also featured on many big hitting compilations over the years from major artists such as Armin Van Buuren, Paul Van Dyk, Ferry Corsten, Sander Van Doorn, Markus Schulz, Above & Beyond, Gareth Emery and last but by no means least Tiesto who included 'Answers' on his now legendary 'Tiesto in Concert' DVD (the only UK artist to do so) meaning that David has rightfully earned his place as a household name in the upper Echelons of the Dance Music Fraternity.

David is also one of only a handful of Artists in the global scene to be signed exclusively to Armin Van Buuren's Armada stable. In this time he has released countless anthems on Armada including 'Yasai', 'Point Picquet', 'Katsu' and the vocal anthem 'All because Of You' which has over 100 thousand views on YouTube (and rising) and with many more productions lined up for release in 2012 and beyond further confirms that he is a vital asset to the Armada family.

In addition to David's solo releases over the years he has also collaborated with many of the scene's top names working with Artists such as Mark Sherry, Alan Nimmo (Signalrunners) and more throughout the course of his career. David was also part of the platinum multimillion selling Group Public Domain, Scanners plus more and if this isn't enough David also engineers for some of the scenes established and new breed Artists.

Andy Moor (AVA)
David has been a fantastic asset to AVA Recordings, his tunes are always top notch.
On the label side of things, David's own Aria / Aria Knights label is also going from Strength to Strength fast approaching its 50th release and first collaboration it's the ideal outlet for David's recent Collaborations and productions from some of the scenes most promising up & coming talents and the new Aria Knights sub label is also causing quite a stir with a string of hard hitting full fire anthems all lined up and ready for release in 2012.

Although David is Globally Renowned for his productions, he is also one of Scotland's most prolific International DJ's appearing in Ibiza, Holland, Brazil, Singapore, Austria and Germany amongst others. He has also completed a colossal 9 interstate tours of Australia headlining the Utopia event in front of 20000 people in the Sydney Super dome stadium. On the home front David has also played for leading brands and festivals such as The Reading & Leads Festival, Homelands, Coloursfest, Ministry of Sound, Full on Ferry, Colours, Inside Out and has had several appearances at Tiesto's Scottish shows including his infamous SECC world tour.

Mark Sherry
David Forbes is one of the best most productive and versatile producers around at the minute! If you were to cut him, he would bleed dance music…and Red Bull! He has been one of the most consistent artists since way back in the day and has a massive back catalogue to prove it!.

Over the past 15 years you would be hard pressed to name any DJ who hasn't included a David Forbes (or one of his many aliases) Productions in their sets and with almost 20 years of experience in both Production and DJing ability which is a rarity these days there is no question that David Forbes is a true example of the perfect modern day Electronic artist. (William Daniel)