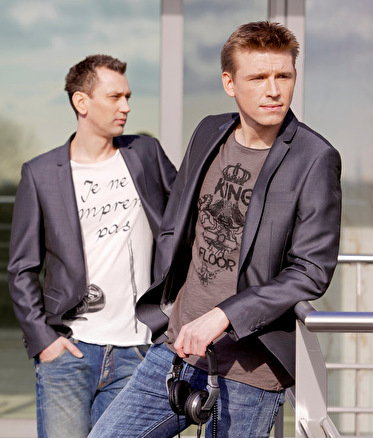 Signum changed things up in 2007 when Pascal moved to Norway and Ron became the main Signum artist. As the digital era took hold and developed into the modern day scene, the Signum sound also evolved into a more diverse and experimental hybrid, without ever losing the true trance sound that they started with in 1997. 'What Ya Got 4 Me', 'Coming On Strong', 'Push Through', 'First Strike', 'The Timelord', 'Distant Signature', the more recent 'Addicted', 'Riddles In The Sand', Roger Shah collabs 'Healesville Sanctuary' and 'Ancient World', remixes for Armin van Buuren, Tiësto, ATB, Oceanlab and many others. All tracks and remixes ride that typical, unrivalled Signum sound that is adored the world over by back in the day and new fans!

Praised for his euphoric DJ sets, Ron performed at A State of Trance 400, 450 and the game changing ASOT 500, as part of a line-up voted for by the millions of listeners of Armin van Buuren's radioshow. For the 7th year in a row, Signum continues his own radioshow 'Xposed' on afterhours.fm which has a large and loyal worldwide fanbase each month. 'Xposed' isnt just a radioshow as you will find out in the not too distant future as it branches out into Signum's very own branded music concepts.

The first Signum artist album. 'For You' released in 2010, was a full-colour collection oldskool trance, rousing tech, uplifting, Balearic prog and cinematic down-tempo. Featuring collabs with Roger Shah, Antonia Lucas, Kate Louis Smith and Julie Thompson, 'For You' takes you in completely.

After the release of the album and touring the world over many continents. Ron took a step back with focusing on Signum as he didn't know which direction to go into anymore. He's helped out quite a few artists with their productions, worked on trailer music and started a new project with his younger brother Vincent, called Ron Hagen & Al-Exander.

5 years is a long time to be off the production scale with a project like Signum but Ron used that time wisely, as he once again established himself as a DJ who never dissappoints, upped his production skills to an even higher level and now he's back and hungrier than ever! With a fresh approach and a new direction, a brand new Peak Time Monster was born and the perfect comeback tune:

Immediately signed to Armin's Who's Afraid Of 138?! BlockBuster was played 3 weeks in a row by the main man, voted Future Favourite by the public in episode 733 and picked up the number 3 spot on the beatport main trance top 100! As if that wasn't enough already, the Signum Signal remix of Alex di Stefano's - I've got the Power is causing another massive stir at the moment.

Outburst Records label boss Mark Sherry approached Ron to do a remix in his beloved First Strike Tech Trance style. Already played twice on ASOT and set for a release in November this Tech Trance Monster is another building block in the things to come!

With a massive supply of pedigree and passion, an open mind and the fuel to keep the highlights coming for many years to come, Signum will keep the trance fire blazing in his own unique way.