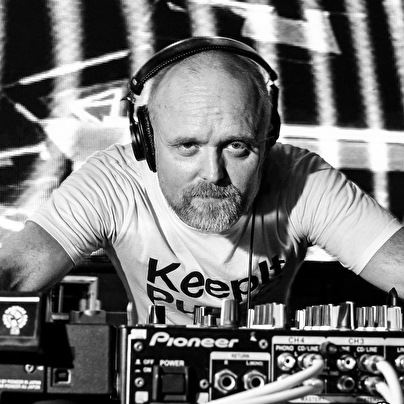 Releases like 'Solarcoaster', 'The Calling' and 'Seven Cities' are all benchmark classics of its pre-millennial period. The latter track – among the first of the Balearic trance anthems - has been re-released 3 times, and now sold in excess of ½ million copies. Remixed by Armin van Buuren amongst others, its instantly recognizable sunset/sunrise-sound legacy is still heard in tracks today. With the albums 'Anthology One' 'RainStarsEternal', 'Touchstone', 'Pure' and most recently the cryptically titled '. - - - - ', he's also released a quintet of critically revered longplayers.

Solarstone has long brought his sound to some of the most famous clubs, arenas and festivals on the planet. In Europe, those have come to include Tomorrowland, Cream Ibiza, A State Of Trance & Global Gathering, whilst further afield he's rocked TomorrowWorld, Stereosonic, FSOE and numerous others.

Pure Trance: Having championed trance's true nature from his very first release, the last 5 years have seen Solarstone push its origin sound - almost singlehandedly - back to the top of the genre's agenda. Through his gospel of #PureTrance - modernizing the genre's heart, whilst ring-fencing its soul - he caught the disposition of the scene with zeitgeist timing. Within its first year, Solarstone's ideology of Pure Trance had developed into a bona fide musical movement. It's one which has been captured by a major a mix-compilation series, worldwide Pure Trance club and festival shows, the Pure Trance and Pure Progressive record labels & its weekly radio show.

Now standing at five volumes, the Solarstone Presents Pure Trance series has seen him team up with co-mixing likeminds including Giuseppe Ottaviani, Orkidea, Bryan Kearney, Gai Barone, Sneijder and Forerunners to mix-comp-define the movement's sound. DJ Mag said of its 4th edition: "Pure Trance has established itself as the genre's new bedrock… and a firmer one, few could wish for".

Pure Trance Radio is the latest incarnation of Richard's long running, widely syndicated radio show. Its weekly hour-long format includes features like the Progressive and #WeLikeItPure Selections, Not The Kind of Thing We Usually Play, the Big Tune and the Chill Out Moment. Pure Trance Radio is now broadcast across some 30+ FM & Internet stations to a listenership now in excess of 8 million. Receiving its first airing on every Wednesday at 22:00 CET on DI.FM's Trance channel, the summer of 2017 see it reach its landmark 100th show.

With the launch of Pure Trance Recordings & its sub-label Pure Progressive, the Pure Trance label group has risen to a position as one of the best sellers on Beatport. In partnership with esteemed Dutch music house Black Hole Recordings, it brought a label platform to the movement's most gifted music makers. Reaching its 70th release in May of 2017, its discography includes work from M.I.K.E. Push, Salt Tank, Robert Nickson, Bobina, Ferry Tayle, Driftmoon, Future Disciple, Orkidea, Adam Ellis, Simon Templar, Basil O'Glue, Forerunners, Lostly and DIM3NSION.

Solarstone – The Music: In 2012, following the release of the Anthology One' 'RainStarsEternal' and 'Touchstone' albums, Solarstone released 'Pure'. A reaction to the ever-greater federalisation of trance's sound, he used the album as a means of sonically clarifying his position. It spawned seven singles, including 'The Spell' ("a revelation" – EDM Magazine), 'Fireisland' (with Aly & Fila), its title track, as well as 'Falcons' with Giuseppe Ottaviani (a MIXMAG Tune of the Month), 'Jewel', 'Please' and 'Lovers'. 'Pure' became the birth point for the Pure Trance movement.

2014 to 2016 saw a clutch of additional hits including 'Once' (with IKO), 'Nothing But Chemistry Here', 'Shield', 'Lost Hearts', 'Infatuation', 'Fata Morgana' (w/Gai Barone) and 'Herald' arrived, elevating Solarstone's profile to the international DJ A-List.

They were followed in spring of 2017 by the 8-track album '. - - - -'. Ciphered in Morse code, it was Richard's enigmatically minimalistic encouragement to fans to look deeper into what it was they were seeing & hearing. Its debut single, the 11-minute odyssey 'A State Of Mind', was called "lavish", "hypnotic" and "epic" by DJ Mag, who further stated that the track was "trance at its timeless best". That single was followed by the Meredith Call sung 'I Found You', which featured a remix by Solarstone's PureNRG partner (see Aliases & Collaborations section below), Giuseppe Ottaviani.

Electronic Architecture: The Pure Trance series aside, Solarstone's also the helmsman of the highly successful mix-compilation project Electronic Architecture. Born from his longstanding love of pop art, its first edition won immediate acclaim for its imaginative concept. It was hailed as "a magical blend of music, art and design" by Tilllate Magazine, a "genuine gem" by DJ Mag and in 2010 was nominated for an IDMA award in the Best Full Length Mix category. A progressive-trance Yin to the 'Pure Trance' Yang, two years later Electronic Architecture² (Or Electronic Architecture Squared) was released to similarly high praise, with MIXMAG's giving it an Album of the Month award and saying it "captured the essence of what we all love about trance". Triple-Disc compendium EA³ - released April 2014 - won further critical acclaim with EDM Magazine calling it "modern Trance perfection".

Solarstone – The DJ: Solarstone behind a pair of CDJs is something that every electronic dance music lover, planet-wide, should witness at least once in their clubbing lifetimes. Worldwide his Pure Trance shows have captured the imagination of hundreds of thousands in electronic music hotspots like Miami, Ibiza & Amsterdam. Since learning the craft in the late 90s, he's played some of the most renowned names (inc. Tomorrowland, Cream Ibiza, A State Of Trance, Global Gathering, TomorrowWorld, Stereosonic, FSOE & numerous others) and spun alongside the worlds best-known DJs many times over. Richard's worldwide travels have also taken him to some of the biggest events and festivals across the globe, as well as some of the most remote. Over the years these have included islands in the Philippines, bush parties in Australia and massive festivals in the heart of Brazil.

The Labels: over the course of his career, Solarstone has owned, co-owned and A&Rd many other successful labels. Included among them have been Touchstone Recordings Solaris Recordings, Deepblue, Molecule and Crashing Waves. At the start of 2009, Richard launched solarSwarm, an online community record label for die-hard Solarstone fans. In the summer of the same year his insatiable label morphed into solarSwarm Recordings. In a groundbreaking move solarSwarm became the world's first social network record label.

Solarstone – Aliases & Collaborations: In order to showcase different musical perspectives & sounds, Richard has also recorded under a number of pseudonyms. In 2002 he initiated the 80's-influenced Young Parisians outfit, who subsequently scored substantial club hits with 'U Write the Rules' and 'Jump the Next Train'. The natural successor to Young Parisians, 2012 saw him reteam with Ben Lost as Federation – a new band-based live act. Drawing on an even greater range of influences, from several decades, it was signed to Paul Oakenfold's Perfecto Flouro and resulted in 4 Beatport top 10 charting singles.

Launched in the spring of 2015, PureNRG is Solarstone's LIVE fusion with Giuseppe Ottaviani. A connection of musical minds, creative ability & on-stage magnetism, it has since seen the duo grace festival stages like EDC Las Vegas, Tomorrowland, A State Of Trance and Electronic Family. To date, the pair have released five singles together, including the "uplifting" (DancingAstro) 'Secret Of The Sahara' 'Pump Up The NRG', 'Era', 'Scarlett' and the DJ Mag Single of the Month ranked 'Prophecy'.

Solarstone – The Remixes: Over the years Solarstone has always maintained a keen production/remix balance. Most recently he has worked on remixes for names like Royksopp ('I Had This Thing'), Aly & Fila ('The Other Shore'), Hurts ('Blind') London Grammar ('Wasting My Young Years') & Marcus Schulz ('Facedown').