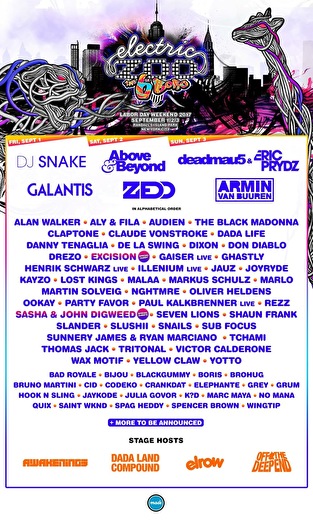 For almost a decade, Electric Zoo has been New York’s very own electronic music festival. Together, we have soared the heights of dance music and dug new depths in underground sounds; We’ve transformed while journeying to Wild Island, and have taken our NYC state of mind to Tokyo, Mexico City, and even Shanghai! But in 2017, we’re pushing our imaginations and our ambitions one step further by exploring new frontiers in our hometown, the wildest place in the world...New York City

You are cordially invited to attend the most special EZoo of all times: Electric Zoo: The 6th Boro.

In ode to the five boroughs, three wise men called The Beastie Boys once said: "Brooklyn, Bronx, Queens and Staten, from the Battery to the top of Manhattan. Asian, Middle Eastern, and Latin, Black, White, New York you make it happen." But we’re about to take you to a part of Big Apple that no cabbie, no beastie, not even the Statue of Liberty could point the way towards! Come to our hood, the one that sparkles with the surreal, dazzles with imagination, and envisions New York City in a way that you never thought possible.

Whether you’re a New Yorker taking the subway, road-tripping from Virginia, flying in from California, or even traveling across the globe from Barcelona, The 6th Boro is your home on Labor Day weekend. On the hallowed green fields of Randall’s Island, we will share life-lasting memories, make new friends, and maybe even fall in love under the Manhattan skyline. Enjoy food from NY’s most iconic vendors, watch fireworks, and most importantly: dance like a wild animal to beats dropped by world’s most talented DJs—together with your closest peeps and thousands of kindred spirits!

Together, let’s discover The 6th Boro, where we will be reunited with our wildest selves, set free once again, at Electric Zoo!