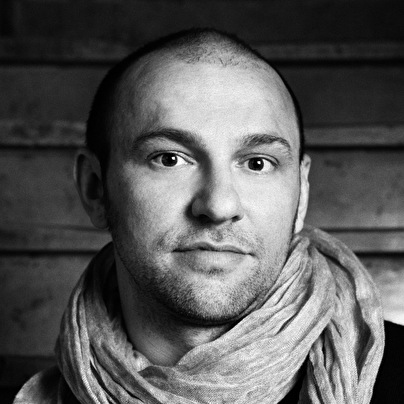 1999, after he had finished his studies in Graphic Design, Henrik decided to move to Berlin and worked as a Graphic Designer for several years. By-and-by things developed nicely also on the music side and he had the chance to found his own label Sunday-Music together with Sasse Lindblad who had just released Henrik's first ever Vinyl 12" called "Supravision EP" on his label Moodmusic Records in 2002. "Marvin", one of the tracks on the record, got attention from many DJs around the world, especially BBC's Gilles Peterson took it in his show and played it with immediate effect. From that moment things made a great leap forward for Henrik: He received first remix requests and started to travel to the UK and other European countries. His next releases "Jon" on Sunday-Music and especially "Chicago" on MoodMujsic became very successful and made him shift his activities more and more from Design towards music production and travelling.

Over the last years with international bookings all around the globe, with regular appearances in Japan, America etc. Henrik improved his "Henrik Schwarz Live" show and is now one of the most requested live acts in the dance scene. At the same time Henrik produced a string of very well received remixes and own tracks: "Walk a mile in my shoes" for Coldcut on Ninjatune became one of the biggest club hits of 2006, "Leave my head alone brain" bridged the gap between Jazz and Techno and Soul and was super well received by Deejays from Hip-Hop to House to Techno and became the biggest hit for Sunday-Music so far. Until today he has done remixes for many very well known names like Mari Boine (Universal), Kuniyuki (Mule Musiq), DJ Hell, Tosca (G-Stone), Ethnic Heritage Ensemble (Deeper Soul), James Brown, Dark Globe feat. Boy George, Omar feat. Stevie Wonder, Jazzanova, Jesse Rose, Detroit Experiment, Michael Jackson (Motown) and many others. Today many fans are awaiting his debut album which is in the works effectively since a few months.

2006, as a result of him getting more and more known by a wider audience, Henrik was asked by !K7 to do one of their famous DJ-Kicks series and the result has been regarded as "one of the highlights of the series" and led to another cooperation of the label and Henrik: "Henrik Schwartz Live" with recordings from his intoxicating live shows from all over the world.

With Dixon and Âme from Innervisions Henrik released "Where We At" with Derrick Carter on Vocals which became an instant classic and marked the beginning of a fruitful and close collaboration between Henrik and Innervisions until today with successful releases and remixes like "Amampondo and Henrik Schwarz - I exist because of you" (Amampondo is a very famous south african percussion group), "Ane Brun - Headphone Silence" (Henrik Schwarz Remix, Dixon Edit), Crocodile IV-RMX for Underworld, Hold my hand IV-RMX for Unkle and many others culminating in the first unforgetable Laptop Supergroup Live show of the dreamteam together "A CRITICAL MASS" in Amsterdam and more gigs around 2009 at Melt!, Dissonanze in Rome, Detroit Electronic Music Festival, NY, Japan and many others to come.

2009 also saw the release of a very well received compilation called "The Grandfather Paradox" were Henrik Schwarz, Âme and Dixon were looking back at the last 50 years of minimalistic music from Stevie Reich to Robert Hood and correlated the past and today to throw a glance at the future with the help of todays technology.

Early 2010 Henrik released the Schwarzonator. It is a music software plug in on the basis of the music programming environment MAX/MSP. Schwarzonator helps creating complex harmonic structures for the computer musician. It can also help interacting with instrumentalists and led to another major discussion about the use of the computer as a musical instrument. More software like this will be written by Henrik in the future to expand the performance and improvisation possibilities given by computers today.

Henrik already worked with the Chicago based Jazz trio Ethic Heritage Ensemble on live performances earlier in his career with gigs in Bordeaux and Chicago etc. His most recent Live duo project together with world-famous Jazz virtuoso Bugge Wesseltoft from Norway happened at several venues all over Europe in 2009 with gigs in Berlin, Oslo, the Jazz Festival Montreux and others. It is about the free improvisation between a laptop and a grandpiano played by two musicians who both have a great knowledge from the ohter one's musical background. 2010 took the duo to a sold out London's Royal Festival Hall with more gigs in 2010 for example at the Philharmonic Hall Cologne or the Norway Numusic festival and many other venues around the globe.

A Critical Mass (H. Schwarz, Âme, Dixon) wrote a new scoring of the black and white horror movie classic "Das Cabinet des Dr. Caligari" which was performed live by the group at the Jetztmusik Festival in Mannheim early 2010.

The future looks bright as we will see more of his one-of-a-kind remixes and remarkable releases in the near future, more colaborations with Dixon and Âme, Bugge Wesseltoft, Guem, Jesse Rose more Live shows and finally an album!

Henrik Schwarz is the Bom!!

Bring it back to me, once again! Funk, jazz, house...alles in een