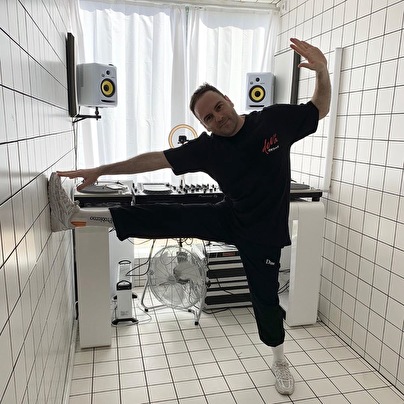 Speeding the Jupiterian highway for a routine, Jensen Interceptor guns for the weak-kneed and the bone-weary, luring the dancers shapeless mass into a house-of-god'esque lair to feed them on his volatile mixture of high-octane, Detroit-perfused electro, post Tour de France Kraut & EBM, and alien sounds sourced further afield. With a dozen 12-inches in as many months, needless to say 2018 has been a record-breaking year for Mikey, setting new standards for a producer who's been tirelessly gathering momentum; neither easing off the gas pedal in terms of studio grind, nor yielding to the main industry's distinct production standards. Unpigeonholeable by nature, the release of his highly anticipated debut full-length, 'Mother', on Lone Romantic crowned him as a producer with a much broader vision than the single/EP format ever allowed the short-stay listener to understand. Seismic bass bomber, hyper-reliable floor steersman, but above all a deadeye epic workout composer with a sixth sense for melody making: no mystery as to why artists such as Aphex Twin, Helena Hauff, Dave Clarke, Stingray, Nina Kraviz and The Hacker have all come to endorse his music wholeheartedly so much JI is a safe, yet uncompromising bet. Strike hard, strike sure.