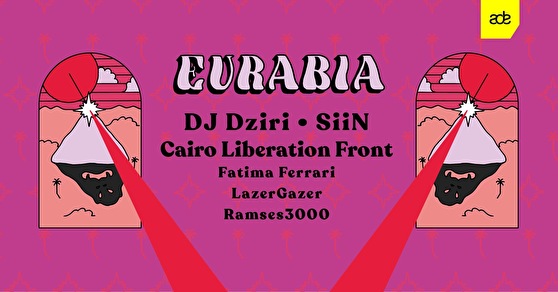 DJ Dziri
DJ Dziri takes the audience on a trip through the unexpected, going from mesmerizing Middle Eastern & North African sounds to the deeper side of minimal techno and acid house. Blending her belgo-tunisian roots into a fierce mix of dancefloor-friendly sounds, she started her own party series called Souk Sessions in Toronto & in her native country Belgium. Dziri recently dropped her first release "Glimpse of an Eye" and played her first Boiler Room, where she shared the decks with Ellen Allien, Juan Atkins and Gerd Janson. You probably wonder why she hasn't played Amsterdam before, and so did we! Now it's your chance!
https://bit.ly/2lW29RU

SIIN س
Rafi from Palestine and Uros from Serbia found each other in Berlin and started SiiN; a marvelous fusion between Arabic sound and techno music. They created music together with only one goal: to make people be present & happy. If you listen to “Dabke Deutschland”, one of the highlights of their self-titled debut EP, you can definitely say they succeed.
https://youtu.be/0x3naiJyoq4

Cairo Liberation Front
This musical vehicle of three geeky somewhat naive devotees of Egyptian electro-cha3bi, blossomed into an infectious exchange between artists from both the Middle East and Western Europe. CLF’s punk rock ethos and liveshows at festivals like Dour, Pukkelpop and Best Kept Secret earned them worldwide recognition. Tonight's the releaseparty from their upcoming EP “Eurabia Vol. 2" where they introduce their new vocalist Bagdaddy and where boundaries get pushed; a totally different approach to modern-day Middle-Eastern electronic dance music.
https://youtu.be/bXrmm_sq12A

Fatima Ferrari
As a little girl Fatima Ferrari found a treasure in her mom’s closet: a huge collection of Afghani europop & Bollywood mash-ups. From that point she was obsessed. That’s where her own journey started off, spinning an eclectic mix of electronic club and booty bounce sets where her love for dark dancehall, Arab bass and UK bass influenced reggaeton comes together. Btw, her USB sticks are as red as her nails. Ferrari red.
https://bit.ly/2lGsl2M

LazerGazer
This Summer the LazerGazer has been popping up on several occasions; you could have seen her spinning at De School, De Melkweg or ar radioshows Red Light Radio and Intergalatic FM. Her sets sounds like an eclectic mix of current and future club sounds mixed with music from her own cultural heritage.
https://bit.ly/2lGsqU8

Ramses3000
You probably know him as the DJ of Cairo Liberation Front, but tonight Yannick Verhoeven will also rock the DJ-booth by himself, spinning way beyond the musical borders of Egypt and focus on all kinds of lovely danceable non-European tunes. Recently Ramses3000 dropped his very first single "Genie Wit a Message (In a Bottle)" via Intercept Records. And when Beatport and Apple Music push your debut in their top playlists you definitely know what's up.
https://bit.ly/2kyPjIX

Make sure you check the door policy on the Amsterdam Dance Event website before you go out. And celebrate safe with the 10 ADE tips via https://www.amsterdam-dance-event.nl/en/celebrate-safe/