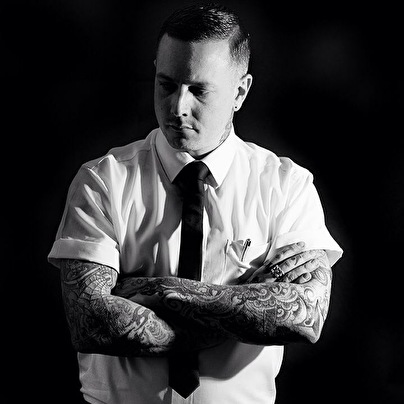 Four albums, countless 12"s and over 15 years deep into his limit-pushing adventures, Gareth continues to surge at the very forefront of the sound he'd first experienced as young Londoner tuning in to Colin Dale's eminent Abstract Dance Kiss FM sermons. Instant jungle entrenchment: he hurled himself into the fray. Vinyls, Reason, illegal raves… The boy – whose mum brought him up on a strict diet of ABBA and Queen – grabbed any angle and any opportunity to get involved.
From ringing up and booking Ed Rush for a party above a pub in Croydon off the back of mobile number on a test press … To scoring a job as in-house studio engineer at legendary rave distributors Alphamagic where he studied the dark art of dynamics at a masters level: Audio wouldn't – and still won't – settle for anything less than full immersion.

His own production stripes stretch back to just after the turn of the century when he found himself at the helm of Resonant Evil. Demonstrating their power with a debut on the genre-defining Renegade Hardware, over the course of two years they scorched the repertoires of Moving Shadow, G2 and Outbreak. As Resonant Evil's brutal bulletins wound down, Audio was winding up. Carving his own path with his own rules, he was soon snapped up by early neuro pioneers Tech Freak Recordings who gave him the opportunity to stretch himself creatively and broadcast his first long playing message. Audio's debut album 'To The Edge Of Reason' showed the world he could cater for experiences beyond the dancefloor yet convey the same attitude and defiant dynamic he'd become synonymous with as a DJ and on 12"s. It was so well received; within a year he was signed by Ed Rush and Optical and for five years became an intrinsic member of the Virus family.

Audio's work on Virus is where he really developed momentum. Already an established headliner across Europe, his productions and reputation became a global phenomenon, leading to tours in every territory. This reputation was compounded by albums such as 'Genesis Device' and 'Soul Magnet' which spawned the mighty 'Headroom'. One of the most influential and successful tracks of its time, it knocked chart-topping EDM star Avicii off the Beatport top spot, dominating the chart for a total of 13 weeks and setting the foundation for his final Virus album 'Force Of Nature'. Released in October 2013, it threw the scene completely off-guard… No other producer has conjured two albums of such strong-armed quality within less than a year. Just as his debut album had pricked the ears of Virus, 'Force Of Nature' attracted Andy C's Ram Records.

Kindred spirits, Audio and Ram Records are a natural fit: both D&B lifers, both as emphatic and enthusiastic about the scene as they were at inception, both dedicated to pushing drum & bass to its furthest limits creatively and sonically, Audio's decorated career has leveled up once more. To Gareth, though, it's business as usual; still immersed in production science (now using the unique Studio One set up) and still just as buzzed about slapping a dancefloor into submission with deadly double drops as he was when he kicked off, Audio's unique punch is harder than it's ever been. to the edge of reason

This man has some rediculous productions..