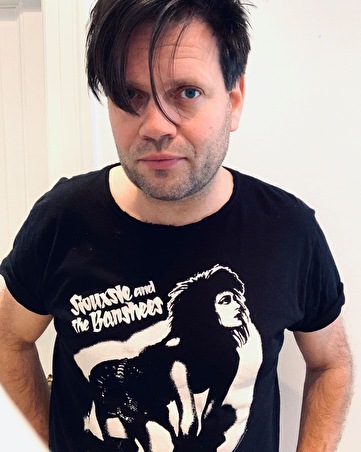 Beginning the story in February 2005, Berlin producer and DJ Steve Bug released the Trentemøller 12-inch 'Physical Fraction' on his brand new label Audiomatique. It became one of the summer anthems of 2005 and was followed by three more killer releases on Bug's main label Poker Flat: 'Polar Shift', 'Sunstroke' and 'Nam Nam'. Trentemøller's fresh sound and quality production added a new twist to the growing minimal techno-world and forged his reputation as one of the hottest new producers of the year.

But even though he excelled at scorching techno-grooves, Trentemøller felt the need to expand his deep-rooted musical horizons. The result was his debut album 'The Last Resort' (2006), a beautifully crafted modern masterpiece; its 13 instrumental tracks together forming a soundtrack-
like fusion of dreamy ambiences, dusty beats, deep dub-tracks and driving groove-excursions. An ever-changing kaleidoscope of colours and moods, 'The Last Resort' struck a chord with new audiences all around the world and became a huge, international hit earning him a number of music awards as well as 'album of the year' in press worldwide.

Collaborations with Richard Davis and amongst other vocalists followed as two more singles came to light, and in the summer of 2007 Anders started a very special tour: 'Trentemøller Live in Concert'. For the first time Trentemøller and band (Henrik Vibskov on drums and Mikael Simpson (guitar/bass) performed tracks from the album 'The Last Resort' live on stage, with spectacular visuals provided by video director Karim Ghahwagi. The tour included festivals like Glastonbury

In October 2007 the double album 'The Trentemøller Chronicles' was released: a special kind of Best Of, which contained Anders' personal se- lection of his best songs which were not included in the debut album 'The Last Resort' and remixes for artists like Ro ksopp, The Knife and Moby, as well as some new and exclusive songs. Trentemøller continued tour- ing in 2008 and released the third single from the album on Audiomatique – 'Miss You'; an intimate and beautiful instrumental. This was followed by a live CD with tracks taken from the stunning show at the Roskilde festival in 2007, 'Trentemøller live in concert', capturing the magical atmosphere of the event.

In 2009 followed Trentemøller's remix for the first single of the new Depeche Mode album 'Sounds Of The Universe'. 'Wrong' was released on the of- ficial remix EP in April 2009. The Trentemøller remix for Franz Ferdinand's 'No You Girls' was released in 2009 and was nominated for a US Grammy award.
A month later Trentemøller presented his first mix compilation on the new label 'hfn music'. 'Harbour Boat Trips 01- Copenhagen' consisted of a collection of Trentemøller's personal favourites from the past four decades.

One of the highlights of 2009 surely was headlining Roskilde Festival 2009, where Trentemøller performed an outrageous show in front of more than 50.000 people. The concert featured lots of guest musicians, performers and extraordinary visual effects designed and built by Henrik Vibskov and his crew.

In May 2010, came 'Into The Great Wide Yonder', Trentemøller's sec- ond artist album. The follow up of 'The Last Resort' offered as much depth and soul as its predecessor, yet sounded ultimately fresh and different. Compared to the intimate electronic mood pieces of his electronic debut 'Into The Great Wide Yonder' pushed a glorious indie rock sound, full of dynamics, distorted driving twang-guitars and haunting synths alongside four beautiful vocal-led songs. After heavy global touring, two more singles emerged, 'Silver Surfer, Ghost Rider Go!!!' (with a brilliant live-video) and 'Shades Of Marble' with great remixes by Kasper Bjørke, KiNK and Tren- temøller himself!

In May 2011 Trentemøller made his contribution to the popular 'Late Night Tales' Mix-CD-Series with a unique mix that also included his hard-to-find cover version of Chris Isaac's 'Blue Hotel'. After finishing his production work for the debut album of the Danish Indie- band Darkness Falls Trentemøller launched an artwork contest for the release of 'Raincoats vs Tide' together with Efterklang in September 2011 where both bands remixed each other's songs. 'Raincoats' and 'Tide' can also be found on 'Reworked/Remixed' -a special album celebrating some of the producer's favourite remixes he completed for other artists, and also some of his personal picks where other musicians have reworked his music. The 22 track double CD included seven new, unreleased exclu- sives and was released in November 2011.

Trentemøller and his live band finished 2011 with a sell-out tour of North America, continuing their 'Into The Great Wide Yonder' live tour with a full band setup. They finished off the tour, which also saw them hit Europe for key open-air festivals, with a special Grande-Finale in Copenhagen. As Trentemøller's notoriety and success continues to rise, 2011 also saw some great achievements, including one of his songs featuring on cult film director Pedro Almodovar's 'The Skin I Live In', and also saw him produc- ing stunning remixes for the likes of M83, The Dø, The Drums and David Lynch.

A surprisingly productive and driven leader in his field, Anders promises there will be more new material coming forth soon. A new single, 'My Dreams' (a coverversion of the Gun Club's song with vocals by Marie Fisker) will drop in April 2012, and his next album is already in the works, due for release early 2013.

2012 will also see Trentemøller continue to rock the clubs as a DJ, an art he is equally well versed in, with a heavy touring schedule already booked up to represent his techno roots. Expect much more from one of Copenha- gen's finest exports in the following months…! Super set gisteren in the NOXX