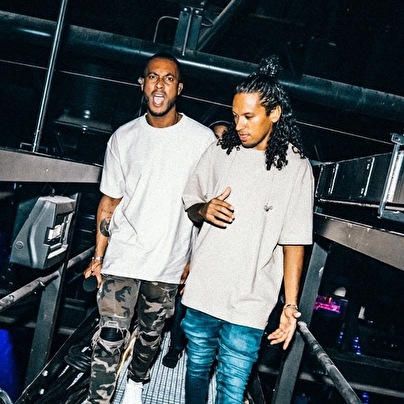 People always ask if there is something in the water in Holland that makes this tiny country churn out so many prolific and successful DJs and producers. Seems there may be some credence to this tale because we have another pair joining the ranks of the Dutch musical super elite.

Welcome to the year of Sunnery James and Ryan Marciano
→ lees meer
People always ask if there is something in the water in Holland that makes this tiny country churn out so many prolific and successful DJs and producers. Seems there may be some credence to this tale because we have another pair joining the ranks of the Dutch musical super elite.

Welcome to the year of Sunnery James and Ryan Marciano

Axwell [SHM] said after playing with them in Ibiza last year that "If there were a Dutch version of Swedish House Mafia, it would be Sunnery James and Ryan Marciano." Impressive accolades for these relative newcomers, who were plucked from their obscure retail jobs back in 2008. It seems their funky house and tribal sound struck a chord with party goers and, after gaining popularity in their home country, these best friends took their electric energy worldwide.

Sunnery and Ryan DJ sets are becoming the stuff of legend. With hair flopping and body rockin', there is no time to sit on the sidelines at one of their shows. They embody dance music fully, bringing the crowd to epic peaks, arms in the air and smiles all around. It's not a genre thing, it's a music thing, and Sunnery and Ryan convey that passion to the dancefloor in a way very few artists can. See them one time and you will understand.

Performances that inspire and awaken the soul have brought the duo escalating successes across the globe. With their star on the rise, Sunnery and Ryan are now part of the superstar DJ set and tour circuit. Their diary reads like a massive global pilgrimage, and in a way, it is just that. A way to preach the gospel of house music –in all its vast forms- to a new generation of music lovers. From the USA to Mexico, Brazil to Guatemala, The Netherlands, The UK, Asia, Russia and all points in between, these two house music champions are breaking new ground one country at a time.

Sunnery and Ryan have quickly ascended into the upper echelon of dance music producers with the release of monster anthems like 'Tribeca' and their remake of Tiesto's 'Lethal Industry.' Fans and tastemakers all have supported each Sunnery and Ryan release with the latter track being a weapon of choice for Armin van Buuren, Sander van Doorn, David Guetta and the list goes on and on. Even the don of EDM, Pete Tong made Lethal Industry his 'Essential Selection' not once, but twice! Steve Angello scooped up their tune 'Markuzza' (along with Traffic and Snitch) for his Size Records imprint realizing early on what a masterpiece it was. A release date is pending.

Hits lead to remix work, and Sunnery and Ryan are the go to producers for some of dance music's most respected artists. To date the boys have reworked tracks for Sander Kleinenberg ('This Is Our Night'), Kaskade ('Dynasty') and their latest remix -Ferry Corsten's ('Ain't No Stoppin') which was released in January of 2012.

They continue to break new ground with their Amazone Project which was started in 2010. Originally devised as a way to showcase their sound across a longer set time, it quickly morphed into a showcase of talent and music that they supported. A sold out crowd joined them at the inaugural event at the Heineken Music Hall in Amsterdam, and since then, the brand and what it delivers continues to grow and expand each year. The next event is slated for the end of February 2012.

Here's where we tell you that Sunnery James and Ryan Marciano are the next big thing, headed to #1 and all that bio fluff. The thing about great artists is this, they don't need words on paper hyping their sound because the only thing that matters is how they make you feel when they play.
Nieuws
Dragonette, Sunnery James & Ryan Marciano, Cat Dealers and Bruno Martini unleash big summer anthem Summer thing · 28 mei 2021
Any of the names tied to this sizzling single has the ability to send the global crowd into a frenzy, let alone when all four put their names on a single record. 'Summer Thing' brings Dragonette, Sunnery James & Ryan Marciano, Cat Dealers and Bruno Martini together on one phenomenal summer anthem, and it's every bit as special as the magnitude of this line-up suggests.
Sunnery James & Ryan Marciano release final single of 2020 alongside american singer-songwriter Hanna Ellis · 4 december 2020
At the end of what's been a strange but nonetheless musically colorful year for Sunnery James & Ryan Marciano with tracks such as 'Life After You' domination the U.S. airwaves, the Dutchmen are unleashing another signature production as their final single of 2020. 'What If', their fresh link-up with American singer-songwriter Hannah Ellis, is the perfect way to close out the year and start off 2021 on the best possible note.
Sunnery James & Ryan Marciano rocyle organiseerden besloten workout-set ter ere van nieuwe single · 11 augustus 2020
De release van de nieuwe single van Sunnery James & Ryan Marciano op 31 juli was al een lichtpuntje voor fans an sich, maar het gerenommeerde dj-duo gaat altijd een stapje verder. Samen met het toonaangevende dancemuzieklabel Armada Music en het eveneens Nederlandse fitnessbedrijf Rocycle organiseerden de dj's namelijk een unieke workout-set ter ere van hun nieuwe plaat: 'Life After You' (feat. RANI).