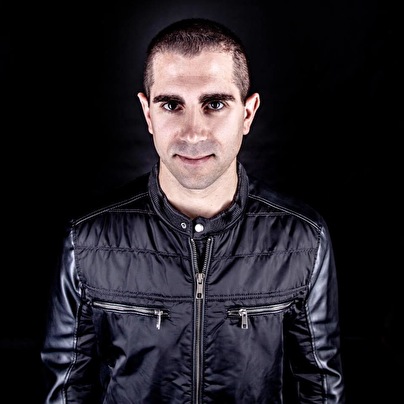 Productions
Giuseppe has long favoured the production-based approach to his electronic music career. Drawing on seemingly limitless reserves of inspiration & passion its been catalysed by his drive to create and experiment. It has seen him amass a substantial discography, now comprised of close to 60 productions and 55 or more remixes. He is now probably most readily associated with his output on Black Hole Recordings, through which he's released his last two albums (see below). Over the years he has also been a keen collaborator and has shared production credits with a long list of musically akin producers. Of late these have come to include Paul van Dyk and Ferry Corsten (on In Your Arms and Magenta), which have produced some highly acclaimed work.

The Albums
ALMA (2016): released on September 30th, 'ALMA' (the Spanish world for 'soul' ushered in a third album chapter in Giuseppe's career. Featuring studio team-ups with Paul van Dyk, Christian Burns, Sue McLaren, Eric Lumiere and others, it met with considerable acclaim. DJ Mag noted it as being a "more multifarious album" than 'Magenta', while Dancing Astronaut recognised it for "featuring personal pieces" from Giuseppe. On it's release, Giuseppe stated: "ALMA is the most introspective album I've ever recorded. It comes from somewhere deep inside and draws on memories from my childhood; times when I was not listening to one, but many types of music".

FAZE Mag awarded the album a 10/10 score, whilst MIXMAG bestowed 'ALMA' their Album of the Month accolade, scoring it 9/10. To date the release has spawned 3 singles, 'Slow Emotion' (Parts 1 & 2), 'Brightheart' and 'Aurora'. Rating it "8/10", the UK's DJ Magazine portrayed 'Slow Emotion' as "a thumpingly drummed, upliftingly riffed, blood-pumping trancer, albeit one played out at 110bpm" and as an "intriguing sign-in" for 'ALMA'. DJ Mag Spain meanwhile heaped 9/10 & Single of the Month praise on 'Brightheart', which featured English singer Christian Burns on its vocals.

Magenta (2013): for the follow-up to his 2009 debut 'GO', album Giuseppe drew inspiration the concept of colour theory, channelling the attributes of magenta into his music. With its first single – the Eric Lumiere-vocalled 'Love Will Bring It All Around', the album bore immediate fruit. Taking Armin van Buuren's Tune of the Week on A State of Trance, the single's also brought commendations from the dance press. 'Magenta' also notably carried first-time G.O. co-productions with Ferry Corsten and Aly & Fila as well as vocal team-ups with Audrey Gallagher, Linnea Schössow and others.

GO! (2009): Giuseppe planted his first significant album marker with the release of the long-player, 'GO!'. It was the dais for 14 tracks (including the significant club hits like ''No More Alone', Angel and 'Our Dimension'). The album became the foundation block for long-lasting production associations with musicians like John O'Callaghan and others.

Giuseppe Ottaviani Live!
Drawing on his vast track repertoire and love of live performance, Giuseppe found himself in the position of being able to branch away from the traditional mixer/turntables DJ set-up. In 2006, he unveiled Giuseppe Ottaviani Live!, the concept provided for a more 'club-concert' audience experience. An instant draw for electronic music lovers the planet over, it also proved an inspiration to other DJ/producers. The Giuseppe Ottaviani Live!'s tour-sheet came to read like a Who's Who of tentpole events. Included among them were Loveparade, Tomorrowland, Nature One, Global Gathering, Creamfields, Streetparade, Sunrise, Transmission, WMC, Colourfest, Cream Ibiza, Gallery @ MoS, Zouk, Roseland Ballroom NYC, SW4 and others.

Giuseppe Ottaviani Live! 2.0
Taking advantage of technological advances, under the name Live 2.0, Giuseppe updated his GO Live! concept (see above) in February 2016. It shifted its orientation further in the studio-meets-stage direction, with Giuseppe developing of a one-man portable tech set-up to accomplish it. It allowed him to bring the inspiration that drives his releases direct to venues and audiences, with the Italian entertaining and creating at the same time. Having launched it at EDC Mexico to rave reviews, he's since taken the concept to Dreamstate, Istoria (PKA Atlantis) and Bliss.

A flash of 2.0-enabled inspiration at the start of 2016 was the embryonic moment for his "harder, darker" and "boundary breaking" 'Slow Emotion' tracks, which ultimately became the first releases to be taken from his 2016 'ALMA' album.

NU NRG
Underlining how long trance has been in his blood, Giuseppe's studio life began back in 1999 through NU NRG. He connected with fellow electronic music enthusiast Andrea Ribeca to form the esteemed two-piece, through which they scored a procession of club hits. These included 'Butterfly', 'Casino', 'Connected', 'The Spaceflower EP', and most notably 'Dreamland' and the 'Free Fall' album. It was at this early point that Giuseppe's inclination for live performances first took hold. This led to NU NRG being nominated for numerous awards and saw them take home Best Live Act at the 2004 and 2005 Trance Awards, with Ottaviani himself collecting the title in 2007.

The PvD Association
Giuseppe has long been a collaborator and musical conciliare to trance legend Paul van Dyk. Ottaviani has remixed 5 of his releases and the pair have shared co-production credits on no less than 6 tracks. These include 'Far Away', 'La Dolce Vita', 'A Wonderful Day', 'In Your Arms' and 'What We're Livin For'. The pair most recently worked together on 'Miracle' for Giuseppe's 2016 album, 'ALMA'.

Compilations: Ottaviani has been a regular compilation mixer. Having started with 'VANDIT – The Sessions 4' in 2007, he went on to mix one of the long-running Techno Club editions in 2009, and most recently contributed discs to the 'Pure Trance V2' and 'F15teen Years Of Goodgreef' releases. In 2011 he began his own series. Working in sound partnership with his radio show (see below), 'GO ON AIR' was released in 2011, with a second edition following in 2014.

The GO On Air Radio Show
Updating the classic radio show formula to meet tomorrow's standards, GO On Air changed from a weekly to now monthly show, with an hour excerpt of one of Ottaviani's Live 2.0 sets. With audio and HD video recorded all across the globe, listeners will get a taste of the real live experience. GO On Air broadcasts via Digitally Imported's Trance Channel every third Monday of the month at 18.00 (CET), along with a live video broadcast via Ottaviani's Facebook. The complete Live 2.0 set of which the show is made of, will be available on Ottaviani's YouTube the following day, synched with the Podcast's release.

GO Music
GO Music follows the musical footsteps of producer, composer, live act and label owner Giuseppe Ottaviani. An invite-only label, home to tracks that have received a personal invite from Ottaviani himself – with big exclusives by rising talents and industry peers. Next to the monthly releases, each quarter will bring a new Live 2.0 musical experiment from the man himself – created out there, during his Live 2.0 sets, surrounded by thousands of eager music lovers.

PureNRG
PureNRG is an on going studio and live act partnership-project developed by Giuseppe Ottaviani and Solarstone. Brought together through a shared love of performing live and a general artistic like-mindedness, the pair commenced the project in the late summer of 2014. Performing 10 or so handpicked shows a year, to date they've come to include appearances at Godskitchen Australia, Tomorrowland, Electronic Family, EDC UK and Dreamstate SoCal. To date, four singles ('Pump Up The NRG', 'Era', 'Scarlett and 'Secret Of The Sahara') have emerged under the name. The latter was especially notable, for featuring an officially sanctioned sample from the Ennio Morricone track of the same name.