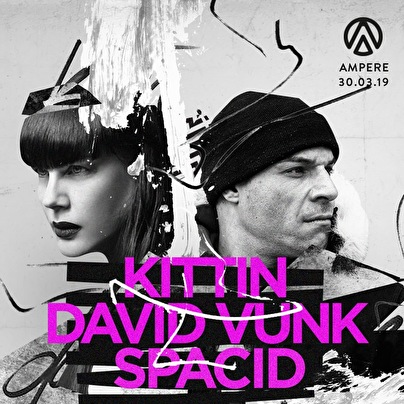 Ampere presents Kittin vs David Vunk - support by Spacid
Two extraordinary human beings with an impeccable taste of music and unconventional way's to work a crowd, Singing Frank Sinatra is allowed while painting your nails is a must.

KITTIN (gigolo, novamute, dark entries) FR
→ lees meer
Two extraordinary human beings with an impeccable taste of music and unconventional way's to work a crowd, Singing Frank Sinatra is allowed while painting your nails is a must.

You may now address Miss Kittin by her original moniker: Kittin. For decades, Kittin has pioneered electroclash, that grimy, irreverent collision of new wave and '90s techno. Singles '1982' and 'Frank Sinatra' with The Hacker cemented her as an international DJ, both tracks heralded as anthems for the underground electroclash scene. Further notable collaborations run the gamut, including 'Rippin' Kittin' with 'Golden Boy' and 'Silver Screen (Shower Scene)' with Felix Da Housecat. Through a relentless work ethic and a crystal pure love of music for music's sake, Kittin, birth name Caroline Herve, has solidified herself as a global luminary in the electronic community.

Caroline Herve was born in 1973 at the foot of the French Alps in Grenoble, France. She grew up inspired by her grandfather, a talented cartoonist for newspapers, who hated show biz and stayed underground as much as possible. Fast forward to 2004 and this dedication to autonomy led her to release her work under her own label, Nobody's Bizness.

At Caroline's first rave a clear shift in music genres was already undertow -- Caroline and her friends could feel, similar to how the air changes before an earthquake, a bridge forming between new wave and electronic music: Detroit techno had wormed its way into France.
Caroline ran towards the new sound, even going so far as leaving home at 16 the very morning after that first life-changing rave.

In 1990 she met The Hacker, the seminal DJ who would become her future collaborator. They met in a new wave club and quickly found kinship while hopping from rave to rave in early '93. During her years as an art student at Beaux-Arts of Grenoble from 1993 to 1994 she started DJing internationally with her first overseas gig in Chicago.

From there, she established herself as serious about the scene as "the boys" by being the first one on the dance floor and the last one off.
Her love knew no bounds when it came to music.
As she says,"Leaving raves in the early morning, after experiencing that sort of freedom regardless of how you're dressed or look, communicating without words through music, watching the people going to work I thought, 'I will have to work very hard to write my own path because I would never fit in.'"

1995 was the year when she was asked to create her first track for a compilation. She called The Hacker for help and their long-standing partnership was born. That same summer she quit her studies and again teamed up with The Hacker to write their first official EP 'Champagne', which included 'Frank Sinatra' and '1982.' They laid the track out in Kiko's record store where, if you listen closely enough, you can hear Kiko sending a fax. Caroline sent the EP to DJ Hell who pressed a dubplate and played it at Love Parade in Berlin.

Her autodidact skills on the decks were paying off. But even then she wasn't in it to create serious techno. To her, Kraftwerk had already hit a pinnacle unreachable by anyone else. Instead, she strove for humorous and witty dance music, tongue-in-cheek pokes and prods at eye-roll worthy societal structures, such as with 'Life With MTV', another co-production with The Hacker.

Like any profession, but especially in the music industry, DJing in the '90s and '00s was still a boy's club. The gender chasm and external pressure only spurred her on towards perfection more. She strove to gently change industry standards from within, suggesting and blithely correcting fellow DJs once lines had been crossed.

'First Album', her debut full-length with The Hacker released in 2001, sold over 50,000 copies worldwide. The staggering popularity of '1982' and 'Frank Sinatra' launched her international DJ career with 'Frank Sinatra' even licensed for 'PARTY MONSTER', a 2003 feature film starring Macaulay Culkin.

Between the years 2001 and 2006 she lived in Berlin and DJed incessantly - these would be some of the busiest years for international DJs, and Berlin was the epicenter. In 2004 she released her debut solo album, 'I Com', where she contained multitudes in emotional depth, most noticeably on 'Requiem For A Hit' and 'Professional Distortion', mixing punk with techno with Chicago House and was her flirtation with Goth culture.
Known for her prolific nature, she released another solo album in 2008 entitled 'Batbox' while based in Paris. Only a year later would she release a second album with The Hacker, this one aptly called 'Two'. Then in 2013 she released her third solo album, 'Calling from the Stars', with Resident Advisor naming it her "most accomplished solo release to date."

So, why the switch from Miss Kittin to Kittin? When Caroline was first getting billed as a DJ, it was the trendy thing to do to add "Miss" in front of all female artists in France. Promoters would often tack it onto her name without permission. Eventually, it stuck.
Now, decades later, she's taking back her name.

Her next release 'Cosmos', will be her most spiritual yet, influenced by her time in the French countryside after a bout of touring exhaustion.
She gives up any formulas from her past; verses/chorus, pop or club beats, to come to the essence of chords and textures, peeling away the non-essential to find joy in music yet again. 'Cosmos' will be released on November 2, 2018 on Dark Entries Records and Zebralution, preceded by the release of the single 'Cosmic Address' on September 28, 2018.

David Vunk is the true beast of the harbor city and the main man behind the ever-playful Moustache Records. On this fine imprint, he drops his own ace tracks and collabs besides a wicked list of West-Coast honchos and synth freaks.

You may know Spacid as a techno dj, but the term “musical chameleon” would be much more fitting.
In early 2000 he was the first Belgian Italo Disco dj who played all over Europe and with a small, really a tiny exaggeration, we could call him the Belgian Italo Godfather. We can also thank the gods for his founding of the Radius label, releasing many outstanding Italo Disco records.