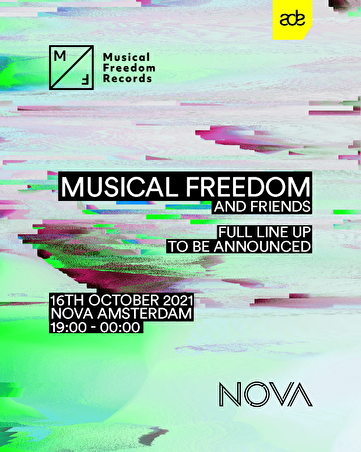 To celebrate the return of live music after an 18-month stint, Tiësto's label Musical Freedom will return to ADE for a special evening showcase at Amsterdam's Club NOVA on Saturday the October 16th. The evening will feature Musical Freedom's most talked about up and coming artists, alongside established DJs that represent the label's finely crafted reputation.

Tiësto founded Musical Freedom in 2009 as a way to freely release exciting music he and his friends were producing and performing in their live sets, making it accessible to a global audience. In Tiësto's continued passion to discover and mentor emerging talent, Musical Freedom features the most exciting new sounds and artists, breaking genres and conventional release strategies. The last 12 months has seen Musical Freedom become one of the defining independent labels in the dance scene. 2021 has seen the label release with the likes of David Guetta, VER:WEST, KREAM, MORTEN, Mike Williams and many others. Musical Freedom was elected 'most supported' independent label two years running by data platform 1001tracklists. Top 6 most streamed label on Beatport in 2021.

Limited tickets are on sale now through: ade.­musicalfreedom.­com