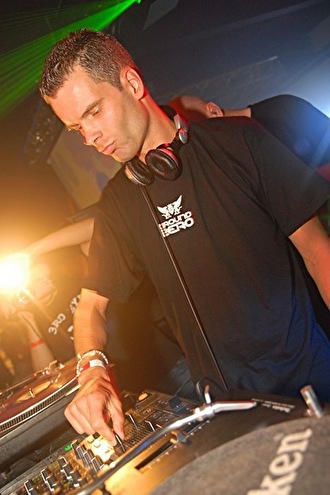 Stinger lived in the same street where Paul Elstak had his studio and after getting the right feedback of several artists like Paul, Buzz Fuzz, Dano and Distortion (to name a few) he decided to seriously try and make more music on a higher level.

He bought better gear, got rid of the beltdrive turn's, and started working as a roady at Excess audio in Rotterdam and part-time for organisations like ISP (former organisers of the well known Hellraiser party's) and sometimes little things for Rige in the Energiehallen. From that point on, things started to get bigger for him and he met DJ Akira who helped him and gave him a job at the BPM Dance record store in Zoetermeer. Stinger and Akira became colleagues and after Akira heard over 40 crap demos Stinger released his 1st track on the (at that time new) Pendeho label (owned by Justice). And Pendeho 001 was a fact! Other great artists on that record are Drokz, Justice and Regulator (cousin of R.Molendijk). All this was in 2001 and soon after that he released his 1st speedcore track on the Hong Kong Violence label (owned by Akira). Meanwhile also, bookings started to come more and more and he played at Huge party's like P.O.R.N., I Hate Trance, Navigator, Hardcore Vs Terror, Industrial Power, Smurfenland, Temple of Terror, Proud to be Hardcore, Nightmare Outdoor(the 1st one in 2005), CSR-Welcome to Terrorland,CSR-Return to Terrorland, CSR-Deadline, Partyraiser 12/5 year jubileum, Hardcore Hooligans, Megarave, Ik ben je bitch niet, Noisekick's verouderings proces 2006 and 2007.

Ground Zero 2007 and DOMINATOR 2008 were one of the highest peaks in his career as an artist so far! He'll sting you with his Stinger!

His release on HKV 02
and Het liefdes gedicht

the devil made me do it

Commando, You're Not Hardcore & Stingertante

keep up the good shit