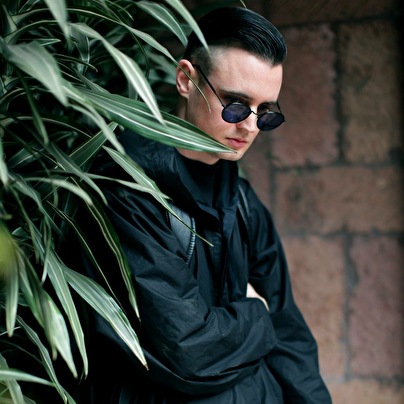 James grew up in Brighton, UK, where during his teenage years he began to DJ, produce and promote club nights. He co-founded the Fallout night, while picking up gigs across the city and experimenting with music production software. The booking of NYC producer Drop The Lime for another of his club nights, So Loud!, would prove to be an epiphanic moment, in that it reconnected James with a love for bass music, inspiring him to write his standout first release, the L-Vis 1990 EP.

As though setting in motion a domino effect, the track "Change The Game" from that release piqued the interest of Alex Sushon, AKA Bok Bok, who got in contact with James, thus beginning an enduring creative relationship that would indeed change the game. James relocated to London soon after, although the pair quickly concluded that the city's music scene was, to quote Alex, "shit and we weren't feeling it." The by-product of their vexation was Night Slugs. The first party went down in March 2008 at Camberwell's Redstar, and went on to take up primary residence at East Village (among many other raves at one-off venues) with guests like Oneman, Lil Silva, Geeneus, Christian Martin, Roska and Kode9 feeding into the night's freewheeling attitude.

As Night Slugs began to properly establish itself, as did James as a producer. In 2009 Compass / Zahonda for Sound Pellegrino and the colossal United Groove for Mad Decent were supplemented by a slew of remixes for artists like Laidback Luke & Diplo, Riton & Primary 1 and Gucci Vump. Acting as a precursor for all that was to come the following year, James and Alex also dropped The Night Slugs EP through Glasgow imprint Dress 2 Sweat, introducing Alex's now famed style of artwork and their common interest in eschewing any sort of formulas.

The energy and creativity surrounding the Night Slugs party had reached critical mass by the end of that year: at the start of 2010 the Night Slugs label was launched via Mosca's Square One. By the time James had made his full NS debut with the anthemic Forever You in August, the imprint had put-out peerless music from Girl Unit, Egyptrixx, Lil Silva and Jam City, and was already being spoken of in terms of 'label of the year'. A tumultuous first year was encapsulated on Night Slugs Allstars Volume One, while James and the extended NS family had successfully cultivated a vibe and an outlook that was entirely sui genius.

This considerable momentum spilled over into 2011—killer releases from Kingdom, Bok Bok, Pearson Sound and Jam City made sure of that. In the studio, meanwhile, James had begun to further explore the groove-based exploits outlined on "Forever You" and his remix of Gucci Vump, via re-rubs of Cassius and Round Table Knights. In fact, the real result of these endeavours could be thought of as a lifetime in the making as James released his debut album, Neon Dreams, through PMR Records. Using exclusively hardware (Roland's 707 drum machine features on every track), James has crafted a deeply personal record that, through the voices of Javeon McCarthy and Samantha Lim, conveys the story of a year in his life. Neon Dreams brings 15 years' worth of musical influences to bear, while shifting into focus the love of classic house music that has transcended all of James's output to date.

Never one to let the dust settle 2012 see's James dive further into the House music whirlpool, with an anthemic remix for dance legends Orbital and his first release for NIght Slugs since 2010′s 'Forever You'. Club Constructions Vol.1 is part of a a new series of releases that will operate alongside Night Slugs' main EPs and white label series, a home for their most direct productions, aimed straight for the dancefloor. With CC Vol.1 James draws on classic Dance Mania and Underground Construction vibes to deliver 5 tape-saturated, strictly-analog slices of modern-day ghetto hard house that have been supported by DJ's across the world of house and techno. 2014 looks set to be the year that James and Night Slugs reaffirm their place at the forefront of progressive club music.

I love you forever, James