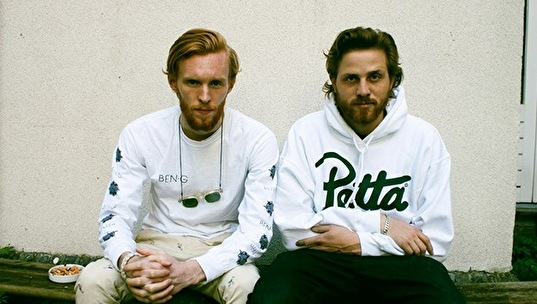 What sets them apart is their unique approach when they are in the DJ booth controlling the music and navigating the crowd. Their versatility allowed them to play at a plethora of places, from bars to clubs, fashion shows to festivals. At the mere age of 18, both gentlemen already had their own night at the famous Paradiso venue. As the rep grew bigger, so did the crowds, the parties and the festivals (Lowlands, Welcome to the Future, Amsterdam Dance Event, Dekmantel), even taking them across the border: Paris, London, Bristol, Cannes, Berlin, Antwerp, Istanbul, Lausanne, Bern and Malta are just a selection of places they've blessed with their original sounds.

This progress in the realms of dance music also inspired the fellows to advance and develop their own productions and remixes. Always trying to create a balanced but surprising mix within house and techno. Sometimes deep and dubby other times bright and warm.

By building their own studio in the centre of Amsterdam, The Beesmunt Soundsystem has a place to experiment and evolve. Studio neighbor Tom Trago, a well respected DJ and producer himself, was now at hand to provide further guidance in the world of house music the duo fell in love with. They released their first 'Circulation' EP in 2012 and their second 'All Day' in the summer of 2013, also released by Soweso Music. The EP received great feedback and the title track got featured in Breach's DJ Kicks.

In april 2014 they released their third EP named "The Baby Maker EP' on the Bristol based Just Jack label. The EP got ranked 4/5 stars by Resident Advisor and received great feedback and support from various angles. The track 'Close To Me' got remixed by Amir Alexander, but it's 'How I Wish' that is picked up best and can be considered an underground hit. Through 'The Baby Maker' Beesmunt Soundsystem gained the right attention to play at clubs and festivals like: Corsica Studios(LDN), Chalet(BER), Just Jack(BRS), Soenda and Mysteryland just to name a few. In September 2014 they released their fourth EP 'Body Shape' on Pets Recordings. The EP balances between big room and underground, a sublime blend between house and techno. With three releases planned for 2015 and the continuation of their own club night 'Soundmachine' (formerly at Amsterdam's most renowned club, Trouw) it looks like Beesmunt Soundsystem is keeping the momentum going. More info coming soon…