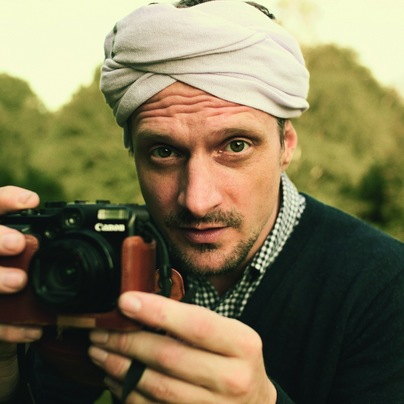 Within only a few years, DJ Koze has slowly worked his way up through the German Hip-Hop scene. With his band Fischmob, he has released several successful records, steadily building up a strong fan base of young left-oriented people.
With their mixture of straight-up Hip Hop skills (and none too subtle poiltical content), dry humor, crazy spoken samples, prank phone calls, etc... the band has found their own niche in Germany's ever-growing Hip-Hop scene. And although he's not afraid to throw down & rock the mike , it's behind the decks where DJ Koze really shines. He's got a
light, subtle approach and feel which belies the fact that he took home the Runner-Up prize at the DMC DJ Championships a scant few years ago.
With their album ''Power", and various smash singles, Fischmob found their way into the German pop charts with the corresponding video enjoying a month-long, high-rotation run on both MTV & VIVA.

Although DJ Koze has had a taste of pop success with Fischmob, he's always been equally interested in experimenting with other forms of electronic music from ambient to break beats to wild sound collages from a myriad of musical genres. An especially notable voyage in to uncharted musical waters, Adolf Noise (produced and performed by DJ Koze and his buddy Marcnesium) turned many a head around. Taking the artist into a deeper Electronic direction, "Adolf Noise" features a far more abstract and unusual use of samples and grooves while keeping the listener on his / her toes by incorporating liberal usage of football commentary, television show snippets, radio plays, and telephone terror with drug-delinquents.
It was this record, that made people, that were normally more into Techno or Electronica, sit up and take notice and it is now these people who are his biggest fans on dance floors between Tokyo and Hamburg -a development of successfully melting a world of musical styles with the power-blending strength of Club Culture. The year 2002 made DJ Koze the deck wizard of Hamburg trio International Pony, whose debut album 'We Love Music' (Skint/Sony) was received to critical acclaim.

As a live DJ, Koze builds his sets on house and disco tracks and uses his well-honed Hip Hop skills blending it all together in a furious mix, making it seem that the term " House Rocking" was coined with him in mind.
The readers of Germany's trend-setting SPEX magazine correctly voted DJ Koze the DJ Of The Years for 1999 - 2004 - a well earned title, playing numerous shows all over the country and in different parts of the world. He was also one of the nominees as best German DJ at 2003's German Dance Awards.

Please take a look at his discography and check out his massive releases for Kompakt, Cologne's finest in terms of smashing, heartwarming,minimal house. Amongst them a very deep dj mix called: "All People Is My Friend" .
Coming up in 2005: A brandnew Adolf Noise album, a DJ Koze album and an International Pony album