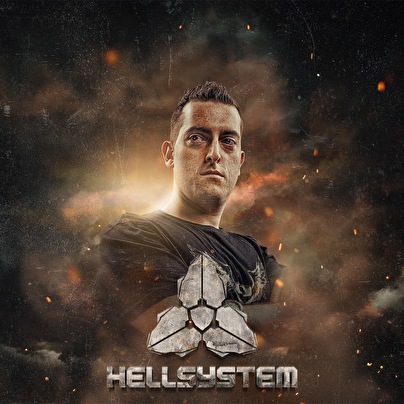 His first hit was Hustlers released in november 2003 which was licensed in several importance compilations. In 2004 released his first cd album called "Back from Darkness" which give his style imprint.

After getting into the scene as producer, he practiced as dj, so resulting gigs over all the Europe and Russia. Finally in 2009 with "Mad Pimp" e.p. and the big hit "Set me up", Hellsystem raised to an higher level and is playing at the best parties like Masters of Hardcore, during this year he did an collaboration e.p. with the great artist Predator and their tracks "Addicted to violence" and "2012" was played by all the biggest artists in the scene.

2010 was another important year, where he released an collaboration e.p. with Djd and his solo e.p. "Another World" that was played by the most important djs in the scene and include the kick-ass remix from Angerfist, which is a real killer application for this relase, and the uptempo 200bpm tracks with the vocals taken from some italian comic movies "Casino Maledetto", "Occhio Malocchio" and "Cazzi Amari" get an great success and finally gave to Hellsystem the fame in Italy, several artists use these tracks as crazy ending for their dj set.

During this year has played in the greatest parties like Dominator, Decibel Outdoor, Syndicate, and for the first time he performed in the Uk and Australia.

In 2011, has played on the 20th edition of the legendary party Mayday, the biggest and wicked open air festival in the eastern Europe: Kazantip Festival z19. And for the first time performed in Canada at Quebec City. His e.p. "The Doctor" that include the collaboration with the "master of darkness" Tieum, reaches the top on the Hardtunes sales charts, and the remix for DJ D "Shock the Future" was another hit.

2012 starts great, whit the relase of "Choose your Enemy" e.p. that reaches the top chart sales on Hardtunes, and shacked the worldwide dancefloors. In october he released his second album "Devil Face", a double cd containing a lot of brand new tracks, collaborations and remixes from the elite artists of the scene, that immediately invaded all the top charts, will follow an world tour of this album that will bring the hell on the worldwide club. Rocking in your face!!!!

more of this shit!! Hardcoree

End of time + Time to prove