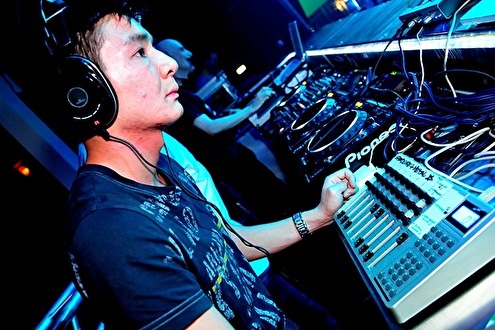 somewhere in the year 2k Bonehead finally decided to do something about the desire that was bothering him for a long time, and he decided to finally start producing. This feeling, to make music, totally satisfied his desire to do so.
After he started looking around for software to start with, he ended up with a simple tracker program called:
"Modplug Tracker", and it was with this piece of software that he learned the very basics of four to the floor patterns, sample cutting, percussions etcetera etcetera.

After a while some program switches were made, from programs like: Skale tracker, Rebirth, Reason
to programs like: Renoise, Logic, Cubase SX, Cubase 5 and finally… CUBASE PRO 8!!!!

Meanwhile he also graduaded as an Sound Engineer and as a DJ his career soared upwards that led him play on many (big) parties in and outside Holland.

Bonehead has been booked in many different countries such as: Russia, Italy, France, Germany, Belgium, Switzerland, Poland, England, Scotland, Spain and Japan.

Next to his DJ performance, he also performs on stage with his live act using his macbook, midi-controller, triggerpad and custom made mask.

Bonehead doesn't prefer one before another, but as a DJ he's more focussed on the task at hand, where as a live act Bonehead likes to get wild and crazy while he's playin and tries to interact with the crowd as much as he can. *What i am talking about is sticking to the rules,
but there are honest people who Lie and Cheat ALL THE WAY!!