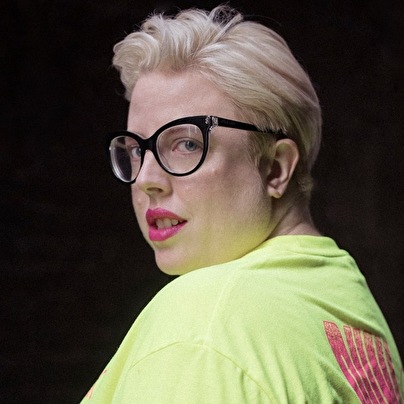 Do you believe in magic?

In some ways, the story of The Blessed Madonna begins with three magic words, scrawled in shoe polish on a broken-down box and hung with Christmas lights on the wall at a small sweaty party: We Still Believe.

"I think you have to give up completely to really understand what hope is. We didn't have any decorations, so I took a box and wrote, 'We Still Believe' on it. I needed to believe that something better was possible and that's how it started. If you don't have any hope, then write some up and hang it on the wall."

How does one transform, barely overnight, from hometown hero into one of the most sought after and respected DJs on the planet?
→ lees meer
Do you believe in magic?

In some ways, the story of The Blessed Madonna begins with three magic words, scrawled in shoe polish on a broken-down box and hung with Christmas lights on the wall at a small sweaty party: We Still Believe.

"I think you have to give up completely to really understand what hope is. We didn't have any decorations, so I took a box and wrote, 'We Still Believe' on it. I needed to believe that something better was possible and that's how it started. If you don't have any hope, then write some up and hang it on the wall."

How does one transform, barely overnight, from hometown hero into one of the most sought after and respected DJs on the planet?

In a span of a few years, The Blessed Madonna (AKA Marea Stamper) used her grit and talent to propel herself into a world that not long ago would have rejected someone outside of its conventions. And yet we are here, and she stands as an absolute force of nature in dance music, just getting started at nearly forty years old, leaving no time soon.

It must have taken a little magic. How else could you change We Still Believe from three words on a box, into sensational underground club residency on two continents, to a sold-out series of events around the world? One room sweatboxes, circus tents, theatres, massive festival stages and entire city blocks have all served as the canvas for this kaleidoscopic event.

It all happened so fast. In 2012, Smartbar named her resident along with, no less than the godfather of house, Frankie Knuckles. In 2013, she became the first ever woman to helm the curation of the club, in thirty years, the oldest independent dance music venue in the world. And then Panorama Bar called.

"I remember that first night. My hands wouldn't stop shaking. I didn't even have a passport before that. I looked over and Kerri Chandler was sitting in the booth while I was playing. I was utterly terrified. I'd barely played outside the Midwest in America and this was my first field trip? But then whatever that thing is, that magic, it took over. I was riding on a wave of love. Only house music can do that. That's the house ghost."

And then the message was out. A sublime technician behind the decks, The Blessed Madonna quickly became known for fluent and dynamic sets, which spanned from disco to techno to house and back, maybe stopping by a little drum and bass on the way. Her touring schedule exploded. Launched at breakneck pace from dot to dot on the globe, she seems as comfortable delivering and eight-hour disco beat down in a bathhouse as she does dominating largest festival stages in the world with searing techno: Coachella, Sonar. You name it.

It's hard to put your finger on how it all works, but it most certainly does work. It's risk. It's guts. It's sweat. Not every DJ can walk on a stage half the size of a football field after a band and utterly command it without a lot of bells and whistles. It's just her and the music, and then of course, there's that inimitable energy. Whether you see The Blessed Madonna first, on a computer screen, maybe one of her Boiler Room appearances, in room with fifty people, or in a stadium, that's word that people always say first: energy. It's unmissable. There's an infectious joy and ability to connect with the room. To see her is to feel like you know her, to be intoxicated by her verve and the sheer elation she feels as the records fly. One moment it's Sylvester and the next it could be Missy Elliott. Things that shouldn't work, mesh together naturally. Stopping mid-set to hug dancers, singing and clapping when she plays, it takes her ages to cross a room when the show is over. Everyone wants a hug and they get it. She looks you in the eye when she plays. The connection is real. People want to tell her their story, tell her what she meant to them. They give her flowers and handmade bracelets and records. She is quick to touch and hug.

She listens, looks them in the eye and lets them know they're supposed to be right where they are. She believes in them.

And suddenly, finally, dance music overwhelmingly believes in her too.

In 2016, The Blessed Madonna became the first woman to be named Mixmag's DJ of the year, landing the prestigious magazine cover wearing a giant gold crown. It was one of many shots across the bough, signalling that a change was coming. The same year Madge cracked the list of top 10 DJ's on the planet in the Resident Advisor poll. In 2017, she helmed the esteemed XOYO residency, sold out for 13 straight weeks in London. Passport pages filled up as if by printing press. She relocated to her London base, securing a popular residency on BBC Radio One, contributing three live Essential Mixes and even filling in for Gilles Peterson, Pete Tong Danny Howard and making television appearances in the UK. In 2018, she scored her own Grand Theft Auto radio station (titled, of course, We Believe) and astonishingly, even appeared as herself in the game, traveling to a secret location and playing an underground club constructed by Rockstar for the purpose of motion-capturing a real DJ set with real dancers for the game narrative.

Past her musical legacy, a deep commitment to social justice remains a natural companion to The Blessed Madonna's life in music and an immensely important part of both her popularity and her day to day work. Whether it's traveling to Uganda to work directly with queer women DJ's, mentorship schemes for women, advocating on behalf of various racial justice efforts, prison and bail reform and especially international refugee, feminist and LGBTQi projects, her commitment to humanitarian work is as strong as her commitment to music.

It's 11am Monday morning at Panorama Bar. This is perhaps the fifteenth time The Blessed Madonna has walked into this room and started this ritual. Her relationship with this room, these people, it is special even among a long list of very special rooms. The unimaginably long, gruelling set, lasts anywhere between four and nine hours or more. Many people have been here since Sunday night. This is the magic hour. The blinds open and light spills into the room. She spins almost out of her body in time with the music and once again, for a moment, everyone believes.