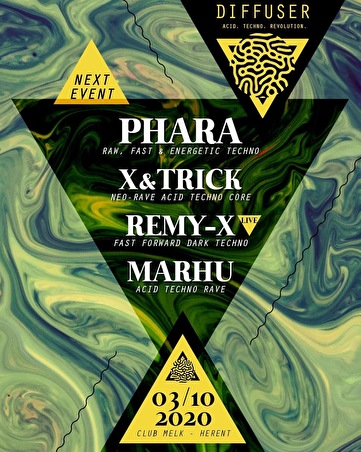 Diffuser at Klub Melk
Prepare yourself for the first edition of DIFFUSER, a newly formed Acid / Techno / Rave event that is focused on spreading truly talented DJ- & Live Performers that have earned their stripes, as well as new talents that fully deserve a stage.

Tickets are sold in bubble-packs of 5 tickets
→ lees meer
Prepare yourself for the first edition of DIFFUSER, a newly formed Acid / Techno / Rave event that is focused on spreading truly talented DJ- & Live Performers that have earned their stripes, as well as new talents that fully deserve a stage.


Tickets are sold in bubble-packs of 5 tickets:

As the night is filled with humming raverie the soul is struck with a bone-crushing impact.

Phara is a true kid of the '90s whose music breathes in industrial chaos and exhales warehouse vibes. With releases on Planet Rhythm, VOLTAGE, Ear To Ground, SK_Eleven and more he has been at the forefront of the Belgian techno scene.

Emblematic figure of the belgian rave scene, X&trick has been spreading his powerful & unique sound since 1998. Started out as dj and party promoter, he soon became known as one of the most innovating dj's in the Belgian scene, soon performing at all major parties and festivals. Following up with an intense touring shedule and played all over the world, including performances at legendary clubs and festivals like Berghain, Dour Festival, Nuits Sonores, Retro Acid, Acid Avengers, Glade Festival and even touring in Japan, USA and Libanon. His style, which he describes himself as "Neorave", is a mix of acid, rave, techno and electro with a tremendous fascination for analogues synthesizers and drum machines.

In 2018, he founded Rave Alert Records to promote and spread the sound of Neorave. On this new label, he releases music from himself and artists who play at the famous Rave Alert parties,
among who Jacidorex, JKS, DYEN, Trym and much more to come.

REMY-X aka Remy Dupon, born and raised in the west of Belgium, started loving electronic music from the age of 12 and started experimenting with hard and software since he was 16 years old. Big music and party lover, he’s been making music for years and lost his heart in this! His sound is raw and unpolished and his style is straight forward techno.

Brussels based DJ/Producer MARHU, has been honing her skills focusing on her music for the past 2 years.

Originally a Swiss rider for the dressage team, MARHU later transitioned to a Music oriented career.

With the discipline she developed throughout years of sports she has demonstrated her creative ability to not only break the rules – but to create her own rulebook entirely.

MARHU’s music combines the force between dark energetic and powerful techno. Influenced by Dax J, Ben Klock and many more, her dynamic style is crafted from both obscure and aggressive sounds which brings an extensive and innate sense of rhythm, and compositional elements which burst forth with relentless energetic expression on every set.