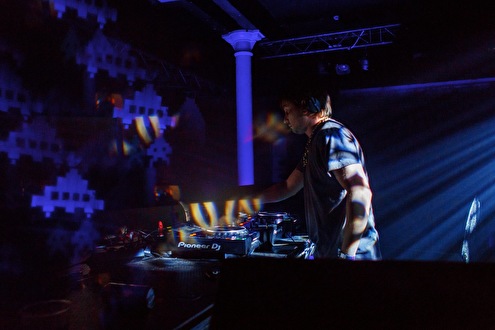 and of course Bug Klinik...
Recently he's also been working on his new projects Knex, and became a member of the dubstep format 'Red Eyes'. After the first performances and releases of both projects, a promising future seems to await both new musical outputs.
X&trick's style is described by himself as 'Neorave': countless kinds of (contemporary) music like DrumNBass, Electronica, Hardcore, Rave, Jungle iget blended into a fresh cocktail of mad beats, sharp bass and catchy melodies..
His liveset is not the usual 'laptop' live, combining laptop, midicontrollers, fx and microphone.. and a portion of humor of course.
'I don't like to take myself to seriously' he says, 'but when i'm on a stage there's only one mission: connect with the audience and take them onto a musical journey, and i'm pretty damn serious about that!'
His strong dj reputation, earned by years of experience and his unique, versatile and always innovating sound. With a fresh ear for contemporary music, he always seems to adapt to the mood of the night and the dancefloor.