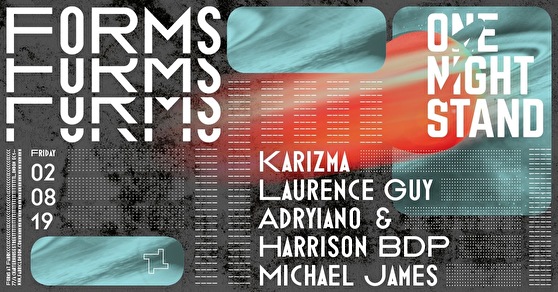 One Night Stand take over Forms. For their first night with us, the Ibiza powerhouses invite Karizma, the soulful extraordinaire with a body of exceptionally rich house cuts. In recent years, the US producer has been best known for putting out club tracks on the acclaimed R2 imprint, but he’s been one of the scene’s key figures for more than three decades. In the early 90s he was best known for championing a pioneering breaks-indebted out of Baltimore, a style that can be found on his highly sought-after records for labels like Hardhead. Karizma is flanked by Laurence Guy, whose modern deep house records can be found on labels like Church and Studio Barnhus. Rising stars Harrison BDP and Adryiano also go head-to-head, while Michael James rounds off the bill.

Advance tickets are now on sale via RA, including £10 early birds for a limited time only: fabricldn.co/qdm10v

fabric is an over 19s venue
Please remember to bring ID with you. No ID, no Entry.
fabric operates a zero tolerance policy to drugs. Anyone found with illegal drugs will be banned from the venue and reported to the police.