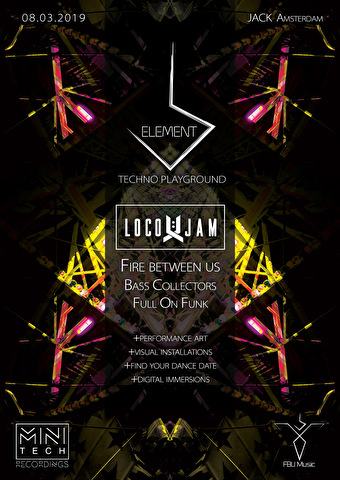 Come and explore this industrial wonderland, expect Performance Art, Visual Installations, Cosy Chillouts, Digital Immersions, Dance Dating Services and of course a Totally Awesome Dancefloor with some of the best Techno acts around.

Tickets: https://partyflock.nl/order_ticket/375914
→ lees meer
The very first edition of ELEMENT - Techno Playground and invited LOCO & JAM to come play with us. This is not just a normal Techno Party, it's a Techno Playground!

Come and explore this industrial wonderland, expect Performance Art, Visual Installations, Cosy Chillouts, Digital Immersions, Dance Dating Services and of course a Totally Awesome Dancefloor with some of the best Techno acts around.

⚛ LOCO & JAM ⚛
[EDIT - TRONIC - TERMINAL M - SUARA]
LOCO & JAM are Northern Irish based Techno duo made up of Lloyd Reid and James Peoples. Formed in 2007 they have went from strength to strength playing clubs and festivals worldwide.
Throughout their 10 year rise the guys have been killing the beatport
Techno charts and now have a healthy CV with a list of Productions
and Remixes on major labels such as Christian Smiths Tronic Music, Coyu’s Suara, Sian’s Octopus Recordings, Chus & Ceballos Stereo Productions, Monika Kruse’s Terminal M Records, Green Velvet’s Relief Records, Marco Bailey’s MB Elektronics Recordings, Mark Knight’s Toolroom Records to name but a few.
Loco & Jam’s Productions have been getting massive support from
some of the worlds biggest DJs including Adam Beyer, Solomun,
Technasia, Sharam, Pan-Pot, Carl Cox, Carl Craig, Green Velvet,
Solomon, Hot Since 82 and many more A-Lists artists.
Recently launching their own label EDIT in 2018 the guys have big
plans in store for the future.

⚛ Fire between us ⚛
[MINITECH - BOILER UNDERGROUND - FIRST IMPRESSION]
Fire between us is Techno. Wonderful, up-tempo solid techno full of emotion. Techno that never gets dull or boring, but rather plays with your mood and leaves you exhausted and energized at the same time.
We found him at more and more festivals these years (Burning Man Netherlands, Betoeterd Festival

, Mutesounds, Beyond festival, Play! Festival) besides his usual late-night sets at various underground clubs in Utrecht and Amsterdam.
As part of the Minitech Recordings team you can find Fire between us frequenting their label nights and releasing on the label. Recently he also started working as their radio coordinator. Fire between us also works with Techno and House-legend Robin “Jaydee” Albers, releasing on his label Streamin Music / First Impression and recently hit the high HardTechno Beatport charts with a remix of Abyssvm's "Steigend" on Boiler Underground Records that he did together with Full On Funk, who is also on our lineup!
As owner of FBU Music Fire beteen us is the creator of ELEMENT and your host for this very first edition.

⚛ Full On Funk ⚛
[FUNK'N DEEP - 50:HERTZ - BOILER UNDERGROUND]
Techno DJ/Producer From the Netherlands determined to make a difference in the scene. “Funk” in his style of Techno stands for combining different genres and bringing it all together to form a new sound which he calls “Progressive Techno”. A fresh mixture of the firm grooves of Techno with the euphoric melodics from Progressive House topped off with cheeky groove elements from Funky House. “Full On” refers to high energy levels in his productions and sets. He’s set on accomplishing his goals not only by creating music with a twist but also by giving back to the scene in many ways with the 50HERTZ community which he co-founded in 2016.
Full On Funk will kick off the night for us in style!

⚛ Bass Collectors ⚛
[TECHNOSTATE INC - MINITECH RECORDINGS]
Bass Collectors is a techno duo from the northern part of the Netherlands. Performing live on stage both friends have a clear preference for the underground sound within techno. Every set comes to you with sheer force, bright vocals and a hard pounding bass. Therefore the energetic sound of these passionate techno lovers fully captures the heart and soul of modern techno.
Bass Collectors officially started in 2015, but their success rose to the next level in 2017. They were privileged to share stages with great artists such as Dave Clarke, Miss Djax, Devid Dega, Juliet Fox, Ave, Steve Mulder, Minitech Project, Zett Feral, Jayzo, Gabriela Penn, Full on Funk, Fire between us and many more.
Bass Collectors is founder/owner of the Technostate Inc. concept. Besides organizing techno events on a frequent basis throughout The Netherlands, they are hosting a weekly radio showcase on Diesel.FM in Miami.
Bass Collectors will close down the night with some seriously solid Techno!