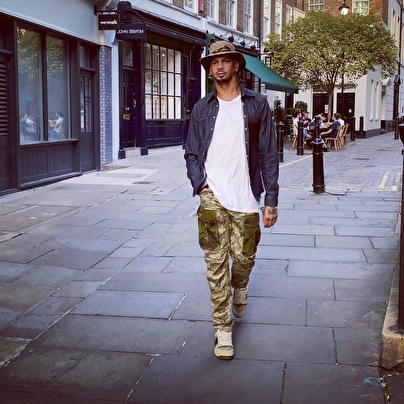 Some may know Marc Kinchen as an icon of the dance world, some may know him only by his initials, "MK", and then there are others who only know his music. This has been MK's experience ever since his breakthrough remix of the international classic hit, 'Push The Feeling On' by The Nightcrawlers was released. However, in the past 18 months we have heard his smash remixes of Lana Del Rey and Chris Malinchak, as well as his solo projects on Hot Creations and Defected. MK has long been responsible for taking ordinary pop records, and turning them into dance classics. This was evident when his third version of Storm Queen's 'Look Right Through' hit Number One in the UK charts this past November. To date, his version of the single has reached 400,000 in sales in the UK.

It's obvious even to a newcomer or neophyte enthusiast that Marc Kinchen's talents go beyond that of just a classic house or dance remixer. He is an artist, producer, DJ, songwriter and an internationally respected name in the worlds of R&B and pop as well as Dance. MK has long pushed the boundaries of musical genres in ways that have earned him a stellar reputation across the board. As a teenager growing up in Detroit, MK was lucky enough to be befriended by one of the true Techno originators, Kevin Saunderson. Kevin became a mentor and big brother, giving Marc the keys to his already infamous, Detroit KMS Studios.

During those early years, MK chose to follow the path of Producer/Artist over that of a DJ. Staying behind the scenes in the studio enabled him to hone his craft. At the same time that Marc was working his magic at the mixing desk, there was a completely different story being told out in the clubs and dance charts as his music gained notoriety all over the World. One after the other, his productions and remixes were going top ten, top five and Number One over and over. We fast-forward to the present after a self-imposed break, MK has returned with some fantastic mixes and productions. Once again, he has proven himself to be consistent and yet surprising, with a whole new series of songs that showcase his uncanny ability to reinvent and rework an existing track.

Over the last eighteen months, MK has become one of the elite in the Shazam charts. He has remixed Lana Del Rey's 'Summertime Sadness' and 'Blue Jeans', Sky Ferreira's 'Everything Is Embarrassing', Storm Queen's 'Look Right Through', Dillon's 'Thirteen Thirtyfive', Chris Malinchak's 'So Good To Me', Sinead Harnett's 'Got Me', Hot Natured's 'Forward Motion', Le Youth's 'Dance With Me', FCL, 'It's You', Wankelmut Ft Emma Louise 'My Head Is A Jungle," Shadow Child's 'Friday', Sam Smith's 'Money On My Mind', Kant's 'Ey Yo', Inner City and Duke Dumont's upcoming single 'I Got You'. Future projects include his new group Pleasure State, with Anabel Englund and Lee Foss, writing and working with Shadow Child, Duke Dumont and Route 94, and his own solo MK album. He is also re-launching his label, Area 10 and working on upcoming remixes for Paloma Faith and Pharrell, Angel Haze and Sia, Rudimental, new group Monarchy, and London Grammar's next single, 'Hey Now', as well as Haim's, 'Days'.

MK's return to the scene as a DJ has him travelling the world at near record pace. Over the last year, he has been in Ibiza, Germany, London, all over the UK, Ireland, France, Spain, Denmark, Holland, Norway, Italy, Croatia, Belgium, Mexico, Chicago, LA, Denver, SF, Boston and even Russia.
"Sometimes we do three cities in one night and that can be wild. It is very different from the solitary existence the studio lends itself to, but I like them both," says MK. "There is really nothing more exhilarating than hearing and seeing the crowd react to a record you have produced, it is so instant, so much warmth and good energy, I am really having a ball". 2014 will even see MK tour Australia for the first time.

A lot has changed for MK since he produced his first record, the now legendary 'Burning' for his own label, Area 10. That record quickly led to him to NYC and a deal from Virgin Records. During those years, MK was putting out songs like 'Burning', 'For You' (4th Measure Men), 'Do It Right, Feel The Fire', 'Love Changes' and 'Always'. Most of these songs still fill the dance floors today, as do his 200 plus remixes for artists ranging from Bizarre Inc, Blondie, Pitbull, JLo, Janet Jackson, Moby, Luther Vandross, Brandy, Pet Shop Boys, Enrique, Masters At Work, Dev, Happyhead, and Jodeci. It would also be impossible to forget the numerous remixes of his iconic versions of 'Push The Feeling On' (Nightcrawlers), which is still one the biggest crossover house hits and has been re-released five times. Even Pitbull used MK's version of 'Push the Feeling On' for his international hit single, 'Hotel Room'. MK has long been cited as an influence by leading producers/DJs, including Todd Edwards, Maceo Plex, Dubfire, Danny Daze, Laidback Luke, Afrojack, Todd Terry, Duke Dumont, Lee Foss and countless others.

In 2012, MK was honored to have his own House Master CD. It was quickly followed by the popular compilation 'MK IN THE HOUSE' in 2013, also on Defected. The release was a double CD featuring current MK favorites and remixes, along with a second installment of his House Master CD. 2013 also marked MK's entry into Pete Tong's Hall Of Fame. 2014 is promising to be a wild ride with new music, adventures and fantastic live shows.
Nieuws
Anabel Englund & MK drop official video for 'Underwater' · 19 november 2020
Dance music heavyweights Anabel Englund and MK have unveiled the official video for their collaborative single 'Underwater', out 18th November.