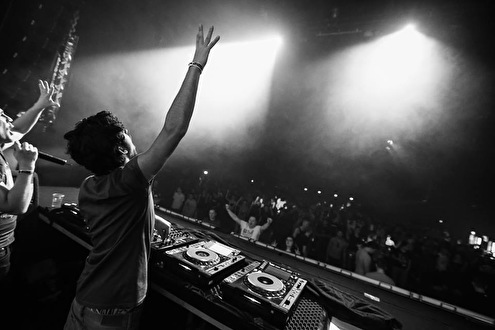 At young age Manuel Fernandez came from Cuba to the Netherlands and because his new stephdad is a musician he quickly became a huge fan of music. It didn't stay at just being a fan. At age 15 he came in touch with hip hop, electro, 2 step and dance. Shortly after he started producing his own beats using samples.
One year later some friends took him to a party where Hardstyle / Hardcore was being played. Not knowing what to expect he attended the party and when the first beats kicked in, he fell in love with the genre and decided to try to put his own vision of Hardstyle into music.

After one year working on Hardstyle and other genres it was time to tackle a new challenge because the music was there, only nobody could play it, so he decided to try becoming a DJ. After buying his first decks and laying low for a year it was time to put his skills to the test by entering several DJ contests. The results were satisfying, always winning or ending in the top-3.

His talent was noticed by Q-dance at the Kunstbende DJ Contest. There he released a new sound not only including Hardstyle but also Dubstep, Schranz and Techno. Q-dance was so impressed by that sound that at the age of 19 after only spinning one year, they offered him a spot in the line up at Defqon.1 Festival 2011. Not at the Purple stage for upcoming talents, but at the Blue stage where the biggest names in the Hardstyle scene were present. There he showed the world his sounds and received incredible reactions.

Nowadays he is working on his new project together with Biomasterz. They are going to shake the very foundation of Hardstyle itself with their inner creativity.

So, stay tuned for their new sounds!