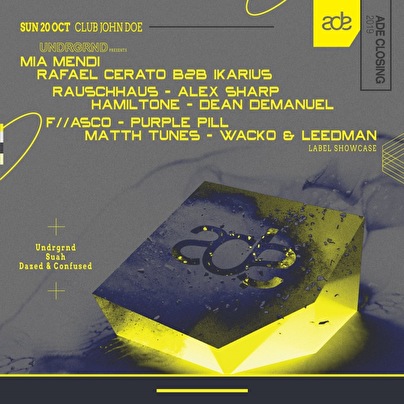 ------
Suah UK
The principle of uniting people together through music, is a cliché used far too often without real purpose or musical intention. Suah was created with the very objective of bringing together like-minded people, in anticipation of not just our releases, but the underground scene. With the firm belief that house music does not need to be generalised, ergo Suah; Haus, the label will be a new home for raw, underground house & techno. The mindset of collaboration being the true numerator of success, which lead to the inception of Suah Records as a sister label to Mia Mendi. With support from some of the biggest and most respected names in the underground, one thing is for certain, the Suah sound can be felt rippling through the scene already.

----
Late AM Records NL
Amsterdam based label with a clear vision : Music comes first!
All members share a strong belief in the Late AM mission: the provision of a wide range of good electronic music, well produced and recorded available world wide on digital and vinyl versions.

The label and the mission are to astonish success in the music industry. The roots of this success lie in the flexibility of a stream-lined operation, the willingness to accept new artistic ideas, to break the rules and to emphasis on the music itself rather than on the performer. Late AM Records does, of course, release musicians of great distinction but it has, in general, going to avoid the common practice of putting the cart before the horse.

In simple words : Late AM Records - where music comes first!

Concentration on music rather than names we are going to eliminate duplication of releases. The Late AM principle is to issue good music, which stands on its own merits.

Dazed & Confused records are on tour again with dates in Malta, Gozo, Szczecin, Ibiza, Offenbach, Munich, Amsterdam and London as a final destination!

The label has generated a lot of hype and success through the years with support and plays from Carl Cox, Joseph Capriati, &me, Claptone, Sasha, Maceo Plex and many more. Dazed & Confused records has become a point of reference for house and techno enthusiast.