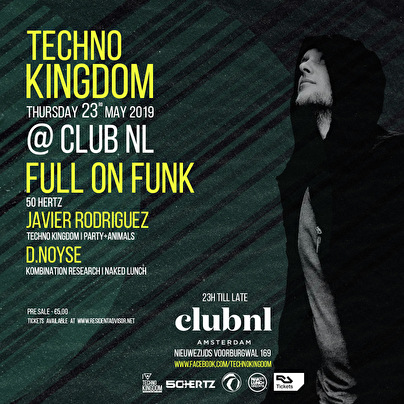 The “Full On” Story...
Techno DJ/Producer From the Netherlands determined to make a difference in the scene. “Funk” in his style of Techno stands for combining different genres and bringing it all together to form a new sound which he calls “Progressive Funky Techno”. A fresh mixture of the firm grooves of Techno with the euphoric melodics from Progressive House topped off with cheeky groove elements from Funky House. “Full On” refers to high energy levels in his productions and sets. He’s set on accomplishing his goals not only by creating music with a twist but also by giving back to the scene in many ways with the 50HERTZ community which he co-founded in 2016.
“You got to believe in an idea, Work hard and it will become a reality”
Labels: Funk'n Deep Records / Funk'n Deep Black // Boiler Underground Records // Sounds R Us Recordings
How it all began....
Full On Funk, was born in a small town in the south of the Netherlands. When he was about ten years old he got his first cassette tape which was the Michael Jackson album “Bad”. Since that moment he started to enjoy music to the fullest.Later he started playing around with music, and after he got his supporting family to buy him his first equipment, the “annoying the neighbours” project could get started! With them asking for years “to turn down all the *&%$# noise” which finally made them move out, it made Full On Funk realise how music really can touch peoples lives. This, however, was of course not the best way to do so. Thats why he spent all of his teenage years learning to respect music and find out how powerful a tool it could be to give people a great experience. He was soon to realise he would do everything he could to be able to do this for as long as possible!Now, with years of experience performing as an artist in several genres of dance music both nationally as internationally, this Dutch DJ/Producer is on a journey to show the world something refreshing. With the start of 2013 the name “Full On Funk” was born and from that moment on the entire concept around it could begin. A name that really suites his style, passion for music and way of performance. For “Full On Funk” playing a set is simply expressing himself in a way that anybody in this world will be able to understand. For Full On Funk every gig, anytime, is a new opportunity and any crowd, anywhere, is a big deal!

The story of 50HERTZ
With a weekly 50:HERTZ Radioshow on Deep Radio

, hosting several Club Events throughout the year, facilitating several official ADE venues & running the Techno seminar area at music conference Dancefair 2018 they tend to keep it fresh and exciting. The latest concept to be hosted by 50:HERTZ is “ ORBIS ”. An immersive Techno experience which guides visitors into its story. Our mission is to bring as many producers, DJ’s, label hosts, promoters and event organisations closer together to get them to work together a lot more and accomplish more as a unity of creative minds.