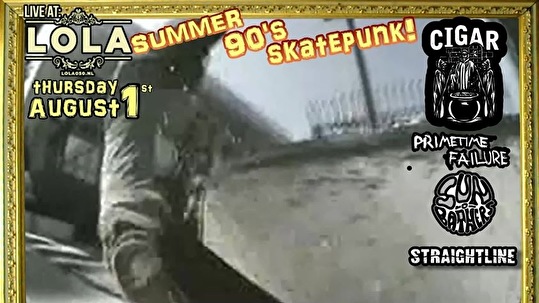 Primetime Failure
Born and raised in suburban areas around Bielefeld, Germany, 4 guys in their thirty-somethings are still trying to save your day. Even though their sound can’t be pigeonholed...stop naaaah damn it... Primetime Failure simply plays that kind of "Skate Punk" a whole generation grew up on.
Remember when you bought that "Mons Tour" longsleeve?
Or the day you first heard all those songs on your older brothers' mixtape?
Remember nearly breaking all your bones trying to skate?
Remember the days you thought it would be like this forever? ...
If there was a slapstick movie on your salad days in the ninetees, Primetime Failure would write the perfect soundtrack to it.
https://www.youtube.com/watch?v=F-xehqYUDok

Sun-0-Bathers
Sun-0-Bathers is a punk rock four piece from Leeuwarden, The Netherlands and was founded in the summer of 2017. High speed melodic 90’s punk rock, lightning fast solo’s, and a modern approach of old-school slightly distorted vocals mixed with the occasional catchy “ooh’s and aah’s”. As if Zeke, Pennywise and Night Birds had an romantic affair with a quite pleasant lovechild as a result. The band released their debut EP "Local Warming" in March of 2018, followed by a small Europe tour through The Netherlands, Belgium, Germany, France and Italy.
https://www.youtube.com/watch?v=I0XkmGAdJWc

Straightline
Straightline was found in the late 90s under the name Softcore but renamed themselves after their Demos and before their first Record “No Way Out” in 2005. The Members changed a couple of times and got their final Line-Up in 2013. They released 2 more EPs in 2010 (Change of Seasons) and in 2012 (Sourcrowd – An EP only consisting of short Thrash and Crossover songs), released their 2nd Full Length “Final Redemption” in 2013 and went on Tour in Eastern Europe as well as Ukraine & Russia. After their EP “Alteration of the Rules” in 2014 they toured the whole European Continent, went on tour in Japan in 2015 and played several Festivals, such as Punk Rock Holiday or Mighty Sounds. Later that Year they supported Satanic Surfers on their whole Latin American tour. Their new Record “Vanishing Values” was released in 2017 via Bird Attack Records in the US, Canada and Europe and they toured Japan again as well as played another amount of Festivals such as Jera on Air or Quimera Fest in Spain. In 2018 the Band toured Australia and Canada for the First Time incl. festivals such as music for Cancer and supported Ten Foot Pole & Big Wig on several shows of that tour. They are currently working on new Music and will be back with a new record and a tour with much the same in 2019.
https://www.youtube.com/watch?v=eGHToTuuzJ8