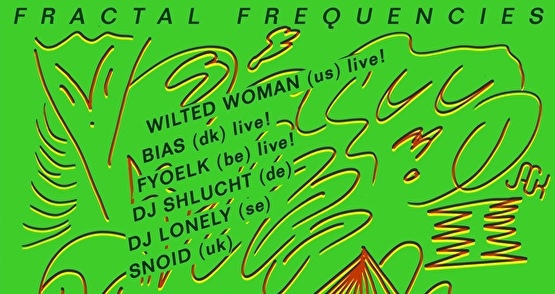 live!
Wilted Woman is an electronic musician born in NYC and living in Berlin. She has released tapes and records on labels including Primitive Languages, Alien Jams, She Rocks, and Plastic Bags. Her music has been described as "wrong dance music done right." She also plays with Silvia Kastel in the band Shakey and hosts the monthly show "Deep Puddle" on Cashmere radio.
https://soundcloud.com/rhizomfestival/wilted-woman-rhizom-2018
https://wiltedwoman.bandcamp.com

live!
Polymedia artist Jonathan Sachse Mikkelsen out of Denmark creates environments and extensive installations with an interest in technology and sensory experience. BIAS is the alias for his experimental techno productions, where heavy arpeggiated synth lines morph with elongated rhythm patterns. Mikkelsen is also half of the table electronics duo Laser Poodle.
https://soundcloud.com/biased-space
https://vimeo.com/251026835

live!
Balancing a line between unpolished house tracks and outer world electronics, Fyoelk explores a wide range of musical languages. Inspired by beat driven sounds and the definition of a "track" to its core elements, his live sets emphasize the action of dub mixing and on-the-fly arrangement, utilizing MIDI synthesizers and sequencers. In his hometown Antwerp he co-hosts the breakdance party series Destination Earth, the annual Delta~Wave festival and is part of art club Forbidden City.
https://soundcloud.com/fyoelk
https://m.youtube.com/watch?v=H2VhJ5Mw5vU

The tape collage DJ practice from the human behind an ambitious community radio project out of Berlin called diychurch.org - Critics describe his work as something that has simultaneously been born 15 years too early and 15 years too late, with the charm of wrong-footed interludes, stop-motion and drug referential stoner-logic reflecting on movies without watching them. Shlucht has published mixtapes via labels like Staalplaat, More Records and Stenze Quo.
https://morerecords.bandcamp.com/album/spears-utilitarian-outlook
https://cashmereradio.com/shows/diy-church

Jonas Ohlsson is a visual artist, DJ and musician living and working in Amsterdam Bijlmer. A pioneer in the Swedish industrial scene of the 1980s, he has collaborated with Enema Syringe and is closely affiliated with Börft Records, a legendary label for experimental electronics out of Sweden. Ohlsson has been involved in countless art projects in De Bijlmer, exhibited internationally at places like the Cobra Museum and teaches at various art schools. For his first appearance at JACK he will bring a special selection of dance heavy industrial and bonkers acid house from the extensive Börft catalogue.
http://www.fffuck.org/djs/dj-lonely

Magnificent selector who will pull out all the tunes you've never heard! A true ninja of freestyle DJ styles where anything can happen from strange asian pop over mutant wave, obscure house and megatropolis electro to jungle madness. Snoid works behind the lines by day at a record distributor, and has a deep love of many things weird and wonderful. He runs the No 'Label' imprint, releasing an unstoppable stream of off-the-grid records.
https://m.soundcloud.com/darkdelight/poppa-wino-presents-poppas-got-a-brand-new-blag
https://dublab.de/broadcast/topic-drift-anniversary-mark-cremins