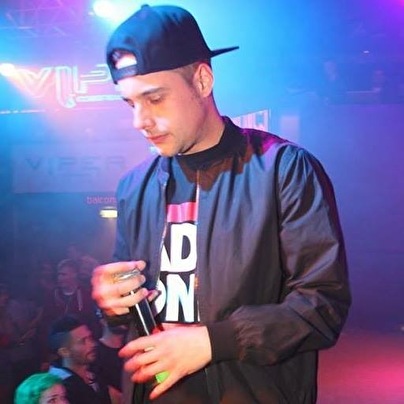 Around 2007 he was approached by a Bournemouth Promoter by the name of Dean White aka Whitey and was asked to be a resident MC for a night he was setting up in central Bournemouth Called ENTER. Linking up with another resident MC, MC Skydro, who he had met previous to this at other events, the pair started rolling together a lot and when Enter started to run monthly in Bournemouth, he decided he wanted to relocate there so did exactly that. In November 2008 he relocated and began then to establish a good student following and fan base of his own. Performing at student events on a regular basis as well as working closely with the 2 main promoters Whitey with ENTER and Judda with DRUMFUNK, he then started to focus more on moving the game forward.

Over the next couple of years he saw himself at much bigger events and has established a relationship with not one but two of the UK's biggest names in Drum and Bass and Dance music, Slammin Vinyl and Innovation. These guys are BIG in the game and hold some of the UK and Europe's biggest and most unique festivals and all night dance events. In June 2010 Felon was asked to debut at Innovation in the Sun out in Spain and Westfest shortly following in October. The Main Stages at these events feature all the biggest names in the scene so this was a huge opportunity for him and a chance for him to prove him self to a huge company and massive crowds and that he did! With a full circle of styles he showcases a mixture of hard hitting double time, ragga style slow bars and has a presences and confidence when hosting on stage, delivering hard hitting clear rhymes. Showing he is doing things in a unique way with lasting impression, Felons ever growing popularity secured his place at Innovation in Sun 2011 and Innovation in the Dam in 2011.

Proving hard work pays off Felon was later approached by and signed to Urban Agency in April this year. With a variety of artists from across the UK and Europe, Urban agency has grown from its beginnings into what is now one of the most influential agencies in the scene! With continuous bookings, and now onboard with a Top agency, finally getting representation has been a big move forward. The agency brings in bookings from all over and Switzerland, Belgium, Germany and Israel for the rest of this year, are just to name few. His profile is rising fast and breaking Europe has been a big step.

Things have progressed massively this year, on stage and behind the scenes and Felon is also now working alongside Subzero. These guys have just done a guest mix for Kmag so keep your eye out for that! He is a passionate, dedicated, inspirational individual who has been taken into the Drum and Bass community as a result of hard work. Felon is pushing just as hard into 2012 and his unique style, professional manor and his determination and creativeness will lead him to remain as a valuable addition to the Drum and Bass scene.