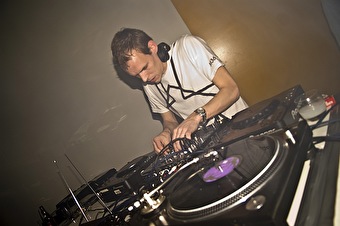 Dj Ivo was born in Germany in 1975.­ He went to The Netherlands with his parents when he was just a little boy.­ Even back then Ivo was interested in all kinds of music.­ His father is involved in organising Jazz music concerts, so Ivo got to listen to tunes from classic to rock and from jazz to pop.­ When Ivo was around seven years old he first got in contact with electronic music from Jean Michelle Jarres, Pink Floyd and Kraftwerk.­ He got really interested in this new kind of music for him.­ He went listening to electric-boogie, acid and new beat half way in the eighties.­ A few years later he first saw some DJ’s doing there things at drive-inn disco’s or small underground parties.­ This was the moment he knew that he wanted to be a DJ also.­

The nineties began and also the house-stream in The Netherlands went bigger.­ The Roxy in Amsterdam broke the barrier and it didn’t take long before huge raves were given in massive buildings.­ In that period, 1991, Ivo went to Ibiza with his mom when he was sixteen years old.­ There he got the house-vibe (if you want to call it like that) in his blood and it never went out anymore.­ Soon Ivo started to buy records and turntables.­

Ivo went older, finished his economical study and got a job.­ Still he was playing at home and sometimes at small parties.­ In 1997 he started to play a little bit in a few small bars in Eindhoven.­ Here he got the chance to play in front of a small audiences and it became clear that he got talent.­

After doing that for a few years Ivo went to be the resident DJ at a new club in Eindhoven: De Rechter! Club Risk, a promoter from Amsterdam, asked Ivo to be the resident DJ for their new nights in De Rechter.­ In 2002 he did a compilation for Puschkin, a promotional CD release sponsored by Puschkin Vodka.­ Names of DJ’s that also did a CD compilation for Puschkin Vodka are: Eric de Man, Cassie 6, Jay Samuel and DJ Deep.­ He played with names like: Erick E, Roog, Benny Rodriguez, Quinten de Rozario, Tony Thomas, Tania Vulcano(Circo Loco), Reche (Space Ibiza), Marko (La Rocca), Prinz (Café d’Ansvers), Pako &­ Frederik (Global Underground), Billy Nasty, Victor Coral and many more to name.­

A few of the venues he played at are: Café d’Ansvers (Antwerp, Belgium), Supperclub (Amsterdam), La Rocca (Lier, Belgium), De Rechter (Eindhoven), Base-Bar, DC10, Blue Marlin (Ibiza), Virus Festival(Eindhoven), Poema (Utrecht), More (Amsterdam), Humanite (Extrema, Eindhoven), Home (Budapest, Hungary).­ In the end of 2003 Ivo stopped playing on a professional level to start working a normal job and he wanted be able to travel around the globe.­ That’s exactly what he did.­ He started living on and off in Ibiza in the summer of 2004 and stayed there till the end of 2006.­ Now he’s back for good in Holland and he is ready to start rocking again.­

He kept renewing himself in the last years and he managed to find his own style.­ It can be described best as dirty- minimal- tech- and a pinch of progressive house music.­ His strong points are his capacity to play long sets and he is able to play with the audience.­ He’s also producing nowadays and he has just finished his first two tracks in the beginning of 2007.­

His all time hero is already for many years Danny Tenaglia.­ This man is without a doubt his biggest example! Other Dj’s that inspired him in the last years are: Tania Vulcano, Luciano, Locodice, Ricardo Villalobos, John Digweed, Luke Chable, Warren Fellow and many others.­