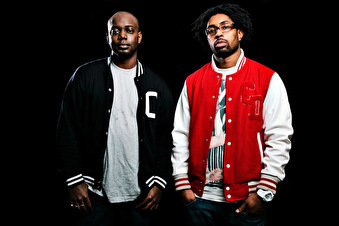 When they join forces in the club they have a direct connection with the crowd, so they have the key to tear the roof off.

This is how it started…
→ lees meer
Most party people might already know DJ Smash (Parker) & MC Aries.

When they join forces in the club they have a direct connection with the crowd, so they have the key to tear the roof off.

This is how it started…

MC Aries started as a rap artist doing his thing at lots of big events, though he wasn't just a rapper. ARIES was a host at lots of radio shows as well. He also hosted at lots of live shows of big world known artists like Angie Stone, Mary J. Blige, Rihanna, R. Kelly, Shakira, Tyga, Jeremih and many more.
MC Aries has his own weekly radio show at Royal Radio called 'Bomdiggity' where DJ Smash was the DJ.
DJ Smash (Parker) once started by playing his brothers records at a young age, he frequently practiced on the "Bose" Turntables. One day he understood the turntable completely and he was inseparable with the turntable. He experimented with different music styles: Classical music, Drum and Bass, Hiphop and Hardcore. He experimented with all genres.

Eventually DJ Smash took two styles to his heart, which gave him the best feeling; Hardsoul & Groove. He played at several clubs in Holland with this style.

On one day DJ Smash decided to take a step back from turning tables to focusing on making Hip hop beats and rapping. He was part of a Hip hop crew named NAP, which also had the Hip hop artists DRT and Ali B.
After a while he put that passion aside, returning to his first love: being a DJ in clubs.

Now DJ Smash is one of the most Eclectic DJs in the scene with a long history. He has played in nearly every club in Holland such as: Hemkade, Offcorso, 013, Thalia Lounge, Outland, Heineken Music Hall, Zalinaz and many more. He also played in countries like Sweden, Belgium, Turkey, Spain and Germany.
That's not all. He stole the hearts of the crowd at parties like: Pure Pressure, R&B Legends, Luxury, 911 and many more.
So in conclusion these two artists are no rookies in this scene. SMASH & ARIES got the respect they truly deserved as a team.
Smash & Aries decided to make it official and signed a contract with Essential-Artists.

Essential-Artists gave them their own concept at SexyEvents. "Urban in the House, summer tour 2011", which is a part of Sexy Mother Fucker summer tour 2011 (Sexy on the Beach).

After all summer editions on the hot beach of Bloomingdale, it couldn't be clearer that Smash & Aries' "Urban in the House" is a great succes.
Smash & Aries consisting of the DJ Smash (Parker) and the host MC Aries found a way to blend Black Music into one of the hottest House parties.
Diversity to every House party, Smash & Aries supported by DJ Dash and other DJs in the Urban scene will guarantee the crowd a perfect atmosphere.
Even National known Dutch artists like Gio, Yes-R and Steggy showed up as guest artists at "Urban in the House" and did their thing.

Now working on the Indoor Editions of "Urban In The House" we keep it going strong.

We are bringing the vibe to other House events. Because we believe that "Urban in the House" is the future bringing the right diversity and atmosphere to every House event. We bring Urban sound on your House ground.

Keep an eye on these two artists working together as a team. They are taking the scene by storm and they are having lots of fun with it!