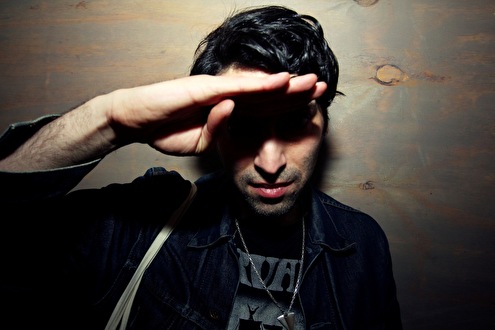 Other triumphs lay a little further in the past. In 2006, he supported Daft Punk for their live return at Global Gathering at their own personal request. The year before, he did the same for Madonna at Koko in Camden with a DJ set which she used as an intro tape on her subsequent world tour. In 2002, he'd lent
some muscle to another icon, creating the bootleg of 'Blue Monday' and 'Can't Get You Out Of My Head' that Kylie performed at the Brits in 2002: the culmination of a craze for "bastard pop" hybrids he'd been instrumental in creating alongside longterm kindred spirits Soulwax. Then there were his DJ sets at clubs and festivals around the world, in which Erol's unerring instinct for playing the right record at the right time brought hardened clubbers and alternative music obsessives together in abandoned celebration of brilliant music.

The problem? Well, Erol could have easily sold out, cleaned up, or rested on his laurels. Yet every time things get a little too comfortable, his indie-kid instincts kick in. It was alternative music that had inspired him to share records in the first place when growing up in north London. "I was so excited by the records I was buying, from what I was exposed to through radio from John Peel's radio shows to Xfm's initial broadcasts, and in the NME and Melody Maker, that I wanted to push that onto my friends," he says over a cup of tea in Mario's Café, the now legendary place immortalised in the opening track of Saint
Etienne's second LP. "Then I realised that instead of making tapes for people there was a way I could make a tape for all my friends at once – by playing music in a club."

Though he started DJing in dance clubs in earnest in 2001 after being invited to play at Bugged Out, Erol still considers himself an outsider in that scene. "Unfortunately, I never had that seismic moment of hearing someone like Carl Craig DJ in '96" he says. "I feel as passionately about the Manic Street Preachers as people in dance music do about Kraftwerk. That's where my DNA is different, which I'm really happy about, because that's the thing that's hopefully made me different to other DJs."

To put this into context, the DJ who won Mixmag's poll the year before Erol was Paul Van Dyk; the one afterwards was Armin Van Buuren, artists who are DJ industries. Yet instead of leaping into the superstar DJ-dom the magazine's accolade seemed to demand, Erol produced three albums for young guitar bands: 'Twenty One' for the Mystery Jets, 'Fantasy Black Channel' for Late of the Pier and 'Couples' for The Long Blondes. He also manned the desk for releases by Klaxons, Franz Ferdinand as well as co-produced Kindness' beautiful single 'Cyan'. They weren't necessarily dance records, but they somehow had the same blend of weirdness, glamour and leftfield pop which made Erol's DJ sets so special.

A logical next step was Erol's own label, Phantasy, which launched in 2007 and has since released records for artists including Fan Death, Babe, Terror, Gonzales – whose 'Never Stop' sound tracked the worldwide iPad TV ad – and Connan Mockasin, who has made the label's first album, the hugely critically acclaimed 'Forever Dolphin Love'. "Even though the artists are from all over the world, I want it to feel very much like a London label." says Erol. "I respect the way Ed Banger did it for Paris or Kompakt for Cologne."

The label's records are highly covetable, not just musically but aesthetically. Babe, Terror's 'Knights', has a knight etched in the centre and will play from the middle of the record to the edge on one side, where a mountain range is pictured "so the music within the grooves – the path – is documenting his journey." This extravaganza ups the ante on Phantasy's previous release, Erol and Boys Noize's own 'Lemonade', which was 12" picture vinyl which resembled a giant CDr, which sold out within hours of release. "Today, if you sell 300 copies of a vinyl release you're doing really well. We sold 1,000 in a single day and were later told we could have sold up to 10,000," says Erol. "You can still embody the excitement of buying a piece of music or an artefact, even in this age of digital convenience." Though it took six months and three different pressing plants to get right, it was priced at an accessible £7 – the same price as a regular piece of vinyl.

'Avalanche'/'Lemonade' was the second of what will be four collaborations between Erol and the Berlin-based producer Boys Noize. The first release, 'Waves' (backed with 'Death Suite') was reworked by Chilly Gonzales into a spellbinding solo piano track, and ended up as the soundtrack to another advert – this time starring Lionel Messi, Barcelona FC's star player ("I like to think that he's heard it and it's made him a better player" says Erol, playfully).

The follow-up was even more spectacular: a collaboration with Jarvis Cocker called 'Avalanche (Terminal Velocity)', which saw the Pulp hero recite the lyrics of Leonard Cohen's own 'Avalanche' over the instrumental techno track – Cohen gave the record his blessing.

Then came 'Roland Rat', so called because the synth line is a Roland SH1 run through a Rat guitar pedal. It's a sheer coincidence that Roland Rat's sidekicks were Kevin the Hamster and Erol the Gerbil, "but I love things which have a reference," says Erol. "There's an other dimension to it, even if it's only understood by me and three other people who used to watch TV AM."

It's all part of Erol's desire to make records that mean something – that do more than simply fill dancefloors. "The one thing I'm really afraid of is making music that's functional," he says. "I want things to be great, and I think they can be great and effective."

As one half of Beyond The Wizards Sleeve alongside Richard Norris, they have crafted some of the most sublime 're-animations' heard in years: Midlake's 'Roscoe', Findlay Brown's 'Losing The Will To Survive' and Franz Ferdinand's 'Ulyses' (a firm favourite of Andrew Weatherall) rank amongst some of Erol's best work, and are compiled on the brilliant 'Re-Animations Vol 1 CD. BTWS have held legendary parties in the capital, playing nothing but psyche and beyond to capacity-filled pub back rooms and clubs.

In that spirit, Erol has started playing epic annual sets every Easter at Bugged Out – 2012's was nine hours long. "I was slightly disenchanted by the way support DJs would play like they were playing Wembley to 10,000 people," he says. "I wanted to build an evening through the music and be able to be my own support. This way, I bought complete freedom to proceedings, as anyone who came would be aware that I would play across my entire musical spectrum, and it would differ to a usual 2 hour set." All 1,200 tickets sold out in advance.

The night has found a home at 'Fire' in Vauxhall, a gay venue with an amazing sound system and three rooms, all of whose speakers play Erol's set. Last year's marathon started with a combination of strange electronica, country and folk music music (not far from his seminal 'Bugged In' Dj mix from 2005), moving through sets of balearic, disco, rap, house, electro, indie and acid. "Nine hours is about 130 songs," says Erol. "But it's which 130 songs you choose. It's not an endurance test – it's about how to lead people, how you keep people engaged."

Erol has since found another outlet for his desire to share his favourite music via the radio station BBC 6 Music, where his succession of 6 Mixes initiated listeners into all kinds of brilliant music, from Factory Floor and ZZT to Arthur Russell and Ariel Pink. The ecstatic audience response has lead him to be invited back for a third series.

Erol's eternal mission to create and sustain the excitement only great records can provide means scouring shops and submerging himself into the tidal wave of music he gets sent, in the hope – usually realised – that he'll dig out an amazing tune no-one else knows about.

These days blog culture saturates listeners in the latest hype, and everyone makes iPod playlists, but we still need people like Erol: gatekeepers with exquisite taste, who will bring amazing records to our attention, and put them in the thrilling context only a great DJ can provide. "These days there's almost a DJ in every person," says Erol. "David Bowie's line 'I am a DJ, I am what I play' was so prophetic. You've got two hours, what can you do with it?"

Yet few people know how to fill two, or five, or nine hours more gloriously than Erol – DJ, artist, impresario, fan. Long may he keep kids – of all ages – dancing.