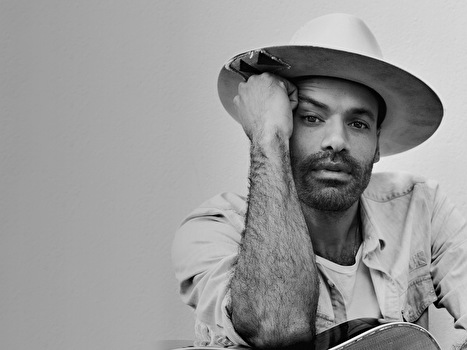 Clark's sixth studio album, Bad Therapy delivers an irresistibly fresh yet timeless fusion of soul, R&B, rock-and-roll, and pop. According to Clark, that hybrid was born from a lengthy period of playful experimentation. "The whole process of making this album started out very borderless and open," he says. "I had all these colors and sounds and ideas that I was working with, and I felt free to create whatever I wanted without trying to stay in one particular style."

Bad Therapy also finds Clark exploring electronic music, and infusing the album with elegantly crafted beats. At the same time, Clark builds each track from organic instrumentation, channeling the raw vitality he's previously shown in opening for artists like Lenny Kravitz and Amy Winehouse. In balancing those elements, Clark worked closely with Jahi Sundance (the album's main producer and a longtime tour DJ for artists like Talib Kweli and Mos Def). The two teamed up in a studio on the same block as Clark's Hollywood apartment, allowing for plenty of creative serendipity. "Sometimes we'd be hanging out in the studio and Jahi would put on some beats he'd worked on, just as background vibes," Clark recalls. "Every now and then I'd stop and go, 'What's that?', and we'd start writing to the beat and turn it into a song. In a way those are some of the most honest songs, because they just happened on the spot."

Recorded in Los Angeles and in Amsterdam, Bad Therapy marks Clark's first experience in collaborating with other songwriters. "Co-writing felt really scary at first, because I've always been a bit of a control freak when it comes to the studio," Clark says. "For this album I put myself in a position where I no longer had that control, and I had to learn to let go in a way that I never had before. It was the most intense process I've ever gone through in my songwriting, but in the end it helped me to be completely honest in what I was trying to express."

With its urgent rhythms and hypnotic effects, Bad Therapy's lead single "Kiss You the Same" is a powerfully determined love song. Clark says, "I'm telling the other person, 'You may think this is just the honeymoon phase, but when the rain starts to fall I'm going to love you the same.'"

On Bad Therapy's title song, honesty reveals itself in Clark's candid lyrics about the ups and downs of a tumultuous romance. True to the album's warm and hopeful spirit, "Bad Therapy" offsets any heavy-heartedness with sunny melodies, breezy harmonies, and undeniable grooves. As Clark explains, that contrast forms the heart of Bad Therapy. "Many of the songs on this album are about lessons I've learned from past relationships, whether it's bad times I've gone through or some of the good moments I've experienced over the years," says Clark. "To me the concept of 'bad therapy' captures that sense of friction in a really nice way."

Throughout Bad Therapy, Clark continues to reflect on both the bright and dark of life and love. On "Breaking Up with Myself," he matches heavy beats and fierce guitar tones with lyrics shaped by exacting introspection. "I think it's important to sometimes re-evaluate some of the fixed ideas you have about life," says Clark. "'Breaking Up with Myself' is about challenging myself in that way, and maybe even learning who I really am for the first time." And on "Cold in California," what begins as a bittersweet ballad soon unfolds into an epic breakup anthem driven by piercing melody, choir-like harmonies, and incendiary guitar work. "It's about a relationship that turns out to be not what you'd hoped, and that moment when suddenly it's so cold in this place that's supposed to be beautiful all the time," says Clark. "In L.A. there's so much beauty, but underneath there's always that threat of loneliness and heartbreak."

Now dividing his time between L.A. and Amsterdam, Clark was raised in the Dutch city of Haarlem and grew up on the classic soul records spun in heavy rotation at home. After spending much of his childhood going to see his father Dane's band—an R&B cover outfit called Dane and the Dukes of Soul—he picked up guitar at age nine and began writing songs at 15. In his late teens Sony Music Holland offered him a record deal, but Clark opted to head to L.A. after high school and immerse himself in the city's music scene.

After several years in California, Clark returned to the Netherlands and joined forces with famed Dutch production duo Fluitsma & Van Tijn for his debut. Arriving in 2007, his sophomore effort Live It Out featured "Father & Friend" (a duet with Dane), whose breakout success led to Clark and his father performing for the Dutch royal family. Upon its release in May 2010, Colorblind debuted at #1 on the Dutch album charts, cementing Clark's status as a pop sensation. He then put out his fourth full-length Generation Love Revival in 2012 and Walk With Me in 2014, and in early 2015 signed to Concord Records.

As he readies himself for a worldwide audience with the release of Bad Therapy, Clark notes that his passion for music has only grown over the years. "When I think back to when I started making music—writing songs with the few chords I knew, and playing in my little attic room to my G.I. Joe dolls and Transformers—that feeling of dreaming of playing for a real audience someday is still so crystal-clear," he says. "Now that I've built an audience in Holland and I have this opportunity to take my music overseas, nothing's really changed. I still just want to make music, and use my songs to explore who I am from day to day. I love the challenge of that, and I still feel so excited like a kid who's about to take this journey for the very first time."