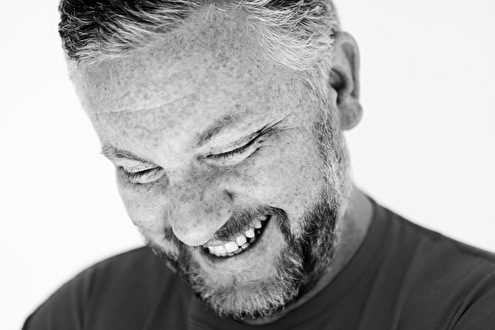 "ATFC is not a football team, in fact it's one man who stands alone in his quest for keeping the funk alive & kickin and he's been doing so for over a decade. He is Aydin The Funki Chile!"
Seamus Haji, Big Love.

ATFC's picture hangs in the House Music Hall of Fame. OK, so it's on a rusty nail in the toilet under the stairs at the end of the hall, but the point is that it's there; a proud testament to one man's ability to both devastate dance-floors with his explosive, peak-time sets and deliver sickeningly slick productions at an awe-inspiring rate.
→ lees meer
"ATFC is not a football team, in fact it's one man who stands alone in his quest for keeping the funk alive & kickin and he's been doing so for over a decade. He is Aydin The Funki Chile!"
Seamus Haji, Big Love.

ATFC's picture hangs in the House Music Hall of Fame. OK, so it's on a rusty nail in the toilet under the stairs at the end of the hall, but the point is that it's there; a proud testament to one man's ability to both devastate dance-floors with his explosive, peak-time sets and deliver sickeningly slick productions at an awe-inspiring rate.

This heavyweight of House was born to Anglo-Turkish parents who immediately named him Aydin Hasirci; Ottoman Turkish for "He who blends 2 records skilfully, is a purveyor of slammin' yet soulful house music whilst simultaneously being a master at whipping up a delicious Spaghetti Carbonara". Longwinded yes, aspirational most certainly but also quite a burden to lay on a newborn baby. Happily though the young Aydin blossomed into exactly what his parents had prophesised and now occupies a unique position within the occasionally rich and often beautiful world of dance music.

"I've been playing Aydin's tracks for a long time and he never disappoints! He's constantly evolving and giving sure fire dance floor anthems as well as crossover hits. On top of that, he's a nice bloke too!"
Roger Sanchez

The complications surrounding the young Aydin's name didn't end here though. Deciding he needed a more instantly recognisable moniker to carry him through what was destined to be a lengthy embrace of the 4/4 beat, the juggernaught known as Aydin the Funki Chile – or more succinctly ATFC – was set into motion.

Several years, some children, a shed-load of singles and more than a few adoring fans later – 80% of which are, naturally, female – ATFC is one of those rare things within the dance music community; an established, successful name the mention of which doesn't have the haters screaming 'Sell out!' from the rooftops or start to maliciously plot his downfall. Three UK Top 40 hits, Beatport and Traxsource No.1's and Pete Tong describing one of your tracks as "verging on genius" do not come without substance to back-up the unquestionable style, although the last in this list can allegedly be encouraged with a few glasses of Babysham and a back massage. In fact, the Radio 1 selector must have been heavy plied with both these luxuries, as in January '09 ATFC was handed the keys to world's biggest stage with his very own essential mix, resulting in raised fists and weak knees around the world.

Don't think for one second however that he's just some kind of studio geek, locked away from the outside world, listening to the same four bars of music thousands of times before spewing forth an eruption of magma-hot house music. Ok, he is like that, but he's also pretty comfortable behind the digital ones and twos, belting out tunes to thousands of smiling faces and stomping feet. In his time he's rocked Global Gathering UK, Dance Valley, Holland, Zoukfest, Kuala Lumpur and Summadayze Australia, not to mention regularly dropping bombs at Pacha, Ibiza; no mean feat when you consider the airspace above Ibiza Town is deemed a no-fly-zone for all but the most dashing pilots.

It's not just big tunes and big stages he dabbles in however. He's also got his dirty mitts on some of the biggest names in the industry. Ever heard of P Diddy, Missy Elliot, Bootsy Collins, Simply Red, Faithless or Dido? Well ATFC's taken each one of them, flipped them upside down, shaken them all about and smothered them in his lovely housey drool, delivering killer remixes that would make Ted Bundy proud. As far as his own releases go, by title at least ATFC reveals a love of text shorthand ('Tell U Y' and 'Giv Me Luv'), an addiction to phone sex ('I Called U (The Conversation)') and the two word's no one want to hear when they start dating a Brazilian supermodel ('It's Over'). Happily in house music, titles mean a lot less than tunes, and all these tracks and plenty more besides have taken up space in all the top house jocks' wallets and ripped many a happy – although now partially deaf – clubber's eardrums to shreds.

"Anyone who maintains a profile at the level and length of time Aydin has is truly world class. He has an ability to adapt his style, to stay relevant without compromising his sound. A true house don!"
Mark Knight, Toolroom.

Recently, ATFC even had his own dedicated compilation to play around with. ATFC In The House London '10 showed what happens when you let a master craftsman loose in the studio for an extended period of time. Once the fag butts, empty pizza boxes and piles of German Jazz literature were cleared, what remained was a hearty dish of house-music loveliness, packed with more bangers than a sausage factory on firework night. Sprinkle this explosive mix with three consecutive nominations as Beatport's House Artist of the Year and you begin to see just how phat this deeva really is.

It's important to remember that while the mere presence of ATFC leaves many breathless (he blames it on the spinach), he is just a man, and not an entire football club as many would think. A man with a bad habit of taking you out for the night of your life, forcing you to dance the night away, getting you all sweaty and then jetting off to do exactly the same with a complete stranger the next day.

I got a bad bad habit baby, baby it's you tralalala