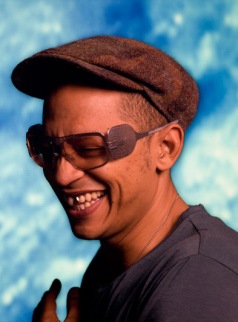 Bukem's first introduction to music, like so many others, was through piano lessons as a child. Unlike many however, the young pianist turned out to possess a natural talent and he quickly moved through the piano grades. Classical music represented the soundtrack to his home life. Both parents having a passion for Rachmaninov and Tchaikovsky that rubbed off on their son. However it was when the family moved to Watford and Bukem changed music teachers that he developed his first true musical love. Thanks to a progressively minded teacher - Nigel Crouch - he was then introduced to the world of jazz fusion, a style which has informed his work ever since.
In the mid eighties, at the age of seventeen, Bukem discovered the joys of clubbing. The teenager regularly checked out the local soul clubs and legendary rare groove all dayers. As a keen record buyer he soon became interested in the idea of putting over his own version of the club soundtrack and before long he became involved with a sound system. During this time he also ran a jazz funk band, although this never presented itself as a serious past-time; just fun. The DJing was his main thing and by 1987 he gained something of a reputation for his sets. However it was in 1988 that Bukem first realised that DJing could offer a full-on career.

In 1990, LTJ Bukem got his first big break - at 'Raindance'. Booked to play between 1 & 2 AM in front of 10,000 people, it was the first true test of this fledgling DJ's skills. It may have taken all of his mates to push him onto the stage but it proved to be a set that he'll never forget. From the first track he "ripped it up" and LTJ Bukem, the world class DJ was truly born.

Naturally, Bukem then ventured into the studio to record a track which was to become one of the most influential records of the era. This 12" titled 'Logical Progression' surfaced on the newly formed Vinyl Mania imprint. At once anthemic and relaxing it offered the first true blueprint to Bukem's sonic vision.
By the time of his follow up to 'Logical Progression' Bukem had set up his own imprint. Run from a small office in Harlesden, London, the label was christened 'Good Looking' and its debut offering came in the shape of 'Demon's Theme'. Finished in mid 1990 and pressed up onto dub-plate, Bukem dropped it into his sets for a full year to test the reaction before he finally released the track officially in July '91. 'Demon's Theme' immediately caught the imagination of many people, its soulful combination of rushing breaks, lush ambience and mellow vibes opening up fresh vistas within the increasingly dark ambience of the rave.
Bukem's next release was 'Apollo' in '92, however his biggest breakthrough came with his next release 'Music' in 1993. In 1994 Bukem unleashed '19.5' while the release of the similarly epic 'Horizons' coincided with the opening of the legendary 'Speed' at the Mars Bar in London. This was an important time for Bukem. The label was gaining ground with its growing catalogue of must-have tunes and Bukem's own in-demand DJing. The launch of 'Speed' was intended to run hand in hand with the growth of Good Looking while also offering a focal point for the growing drum and bass scene. After a shaky start, which almost forced the night into closure, 'Speed' quite literally took off one night in the summer of '94.
Typically, Bukem made the most of this situation. He used the sudden media limelight to forward his vision, highlighting Good looking Records and its label roster. In 1995 the label licensed a compilation to London Records. Titled 'Logical Progression' it featured exclusive cuts from the roster alongside older tracks and is still one of the highest selling drum & bass compilations to have been released. "I wanted to see the label grow, I wanted to invest in the people who were signed to the label, so the move had to happen. It was never simply about LTJ Bukem, it was about Good Looking Records, Logical Progression and the sound."

Bukem's own music never took a back seat. There were remixes (including astounding reworks of Jodeci's 'Feenin' and Michelle Gayle's 'Sweetness'), his own additions to the label compilations and a collaboration with David Arnold on the infamous James Bond theme to 'Thunderball'
In the midst of all this rampant activity Bukem also managed to release the 'Mystical Realms EP' in March '98. The EP featured 'Twilight Voyage' with sombre flute refrains, chopping keys and an outer world ambience. The vocal and instrumental versions of 'Orchestral Jam', with its urgent break, echo dropped sonar and dissonant violins, and final track; the reflective, Herbie Hancock-esque 'Journey Inwards'. Three tracks, each representing a deeper development of the Bukem sound, further underlining Bukem's position as a sonic leader of post rave breakbeat culture.
Bukem continued to produce and mix some of the World's best Drum & Bass and cross-over compilations that have ever been put out. Titles such as 'Progression Sessions', the 'Earth' volumes and further instalments of the 'Logical Progression' series have become notorious for the new and exciting directions that Bukem has always strived to take, but without losing sight of his original musical roots and all the things that inspired him in the beginning.
The start of the 21st century saw LTJ Bukem continuing on his extraordinary musical odyssey with his long awaited solo album 'Journey Inwards'; A diverse and multi directional album of drum 'n' bass, soul, downbeat and house tracks that opened the eyes of those that had no faith and warmed the souls and inner belief of those that did. He has also added to his impressive remixing portfolio with his interpretation of 'The Essence' by jazz legend Herbie Hancock. On top of this he has continued the 'Progression Sessions' series of live mixes captured on CD, featuring storming performances recorded live in The USA, Tokyo and Germany. Bukem also compiled the highly acclaimed 'Soulfood' and 'Soul Addiction' compilations and released not one but two 'Producer' series CDs.

Fast-forward to 2007 and after a well earned "holiday" and a carefully considered climate change in the music industry - Bukem and his label re-entered the fray with new quality releases including the much anticipated Double A sided 12" featuring 'Switch' by LTJ Bukem and the mighty 'Drum Toolz' by MC Conrad and Furney on the flip – Released November '07 on Good Looking.

Bukem and his label are back on their mission, 2008 will see many new projects and a few familiar concepts updated for this new era of audio / visual consumption.
Watch this space…

All the while LTJ Bukem will continue to spread the gospel of the Good Looking sound - setting the main stages of the world alight with his stunning DJ sets.