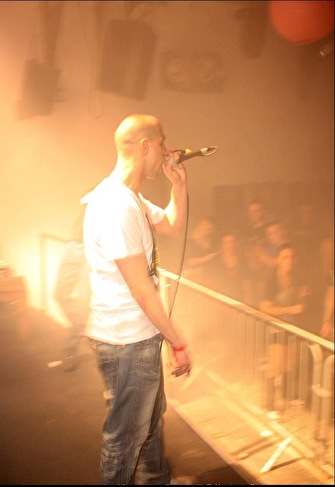 In 1999, Chris (better known as MC Violence) was inspired by,
his friend and big brother, Mc Joe to try MC'en after he heared his Voice.
Said done Chris was discovered by his mentor and good friend
Dj Mogwai a.k.a. Darkside Warrior who asked him after some meetings,
of vocal coaching and performing rules,
to perform at an event called
'Raving Nightmare'
in the club Peppermill in Simpelveld, NL.
At this party, he vocally supported Dj Mogwai in the main hall and the best time.
There he met his soon to know Chef Patrick Lahaye of UHM Events,
who immediately offered him the chance to come and join
Underground Movement House as resident MC.
At the same time Chris had linked other contacts in Germany.
And was asked by Dj Gigi whether he would be MC for him
after a common friend, Chris had recommended to him.

In September '99, it was finally time.
Gigi had a gig in Gelsenkirchen at a youth center where Chris vocally supported him.
After that performance things quickly got out of hand.
Gigi inspired him to make continue.
What he was then at short notice Chris could procure his first Official booking,
on a Hellraiser in Bochum at the 25.Dezember '99.
Where Chris should know his early partner and best friend Dj Spawn.
But to this story we come later.
In the time between Bruce a.k.a. Dj Mogwai took Chris with his performances.
This paid out in bookings throughout
Holland, Belgium Germany, Spain, England
and many more country's in Europe
which gave him the much needed experience to grow as a true
"Master of Ceremonies".

In February 2000 after a short call with the statement
"I need a new MC" met the two boys up on the same day.
What should be the foundation for a successful future.
After several gigs and the interest in Music
Chris was clear that he wanted to make his own productions
and founded a short-hand with Sven a.k.a. Dj Spawn the Label Masters of Darkness.
It and arrived to its own events and a solid crew.
Which after a few years should separate again unfortunately?

With the track "Raving Nightmare (Psycho Trauma)"
should be with the help of Impulse Factory in 2003 then as far as it will.
The first release!
What should bring him half a year later the second release.
By the support of his vocals for the track
'The Hardest"

.MC Violence has grown into a familiar face on stages both in Europe.
Open to different kind of styles in electronic music and beyond,
this MC has shown his face among a diverse range of events.
A skilled vocalist determined to bridge the gap between sound system and crowd.
MC Violence has performed at events such as
Nature One, Thunderdome, Earthquake, Raving Nightmare, Resident-E,
Hellraiser, Judgement Day, Survival of the Hardest, Megarave,
Loveparade, A Nightmare in Germany
and many many more.

In addition to the implementation as an MC on stage,
he invested time with his vocal skills to produce own tracks.
MC Violence is a respected MC in the hardcore scene.
Without a doubt one of the most versatile MC's working today.
Continuing to develop his skills.