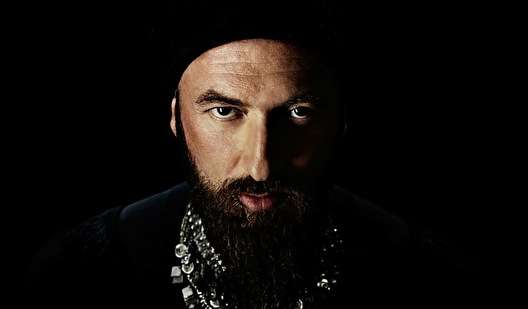 Since the moment he spun his first record, Damian Lazarus's mission has been a clear and urgent one: to blow away the mediocre, the over-inflated, the obsolete; to seek out and celebrate the energetic, the important, the new. Always rebelling, always going places.

"...and to have fun in the process. Playing around with different styles and ideas is what I do best," Lazarus explains.
→ lees meer
Since the moment he spun his first record, Damian Lazarus's mission has been a clear and urgent one: to blow away the mediocre, the over-inflated, the obsolete; to seek out and celebrate the energetic, the important, the new. Always rebelling, always going places.

"...and to have fun in the process. Playing around with different styles and ideas is what I do best," Lazarus explains.

Driven by an almost childlike curiosity, a vivid imagination and wicked sense of humour, he's used his role as a DJ, label owner and now musician to nurture and share the most exciting and experimental music on the planet. Drawn to the darkness, but buoyed by the light, ever ready to embrace new ideas and different perspectives on music and the dancefloor, Lazarus is always ahead of the curve, with a wry smile on his face and a neat trick up his sleeve, How many DJs do you know who've played 'Reviewing The Situation (from the Oliver! soundtrack, no less) half-speed to a jubilant crowd at DC10 in Ibiza. How many DJs do you know who've received a sitting ovation on the dancefloor?

Lazarus was born in London, where he lived until he relocated to Los Angeles in 2009. During childhood, Damian was naturally drawn to classic pop music, and inherited from his grandfather an affection for showtunes which continues to exert itself in the strangest of ways. He spent his teens immersing himself in the sounds of hip-hop, electro, soul and funk, before discovering house, hardcore and jungle at university - sparking a love of twisted, innovative dance music which endures to this day. After working as Music Editor then Assistant Editor at Dazed & Confused, Lazarus joined London Records and in 2001 became head A&R of the City Rockers label. Here he helped sign and release some of the biggest tunes of the era, including Felix Da Housecat's 'Silver Screen Shower Scene' and Tiga & Zyntherius's 'Sunglasses at Night'; his Futurism and Futurism 2 compilations remain the definitive documents of electroclash, not only providing a snapshot of the underground at that crucial moment in time, but mapping its future too.

Damian received a major Djing break in 2002 when he was invited to spin at Barcelona's Sonar Festival and by 2003 he had residencies at some of the best club spaces in the world. His tenure at Circo Loco (DC10 Ibiza) has become the stuff of legend and found him consistently breaking boundaries of sound and stamina, freaking out the dancefloor and taking those on it to places they never knew existed, and may never get to again.

"I thought a lot about these dj sets when pre-producing the album; especially the idea of placing off and strange melodies within a 4/4 dance music structure. It's amazing what you can achieve when you're into weird stuff", he says.

Inspired by the new energy and possibilities in international club culture and music, Lazarus founded Crosstown Rebels in 2003, the label's records offering all kinds of unique and twisted angles on cutting edge electronic music. Recent releases on Rebels from Jamie Jones, Seth Troxler, Deniz Kurtel and Art Department have found the label consistently breaking new ground and the new imprints CDR (a digital only label) and Rebellion are set to change the rules once again.

In 2008 Damian began Lazpod (http://www.lazpod.com), a monthly excursion into weird and wonderful sound, a radio show that draws influences and inspirations from all corners of the musical spectrum and is delivered in a fun and laid back style. With many thousands of fans across the globe, Damian uses the show to let listeners in a little closer to his experimental and eclectic tastes.

"Lazpod is a great entry point for new listeners to my music", he says, "and has been setting off warning signals of what might be coming on my album for some time".

Damian's critically acclaimed debut artist album, Smoke The Monster Out, is another expectation-confounding gesture from this restless musical mind. Released via Get Physical, the album boldly steps outside the realm of what one might hear in a Lazarus DJ set. Featuring his own vocals and riding a vast plain of influences - Neil Diamond to Photek, Bjork to Jeff Buckley - Lazarus demonstrates his keen ear and meticulous attention to detail in a collection of heartfelt, grievously honed tracks delivered straight from the soul. It's a sensitive record, a bold record and above all a celebratory record - one which revels in the pure pleasure, healing quality and dream-potential of music.

"It took me a while to start producing", he says "but once the juices started to flow I knew immediately that this was to be the best musical project I ever created".

A groundbreaking live set to accompany the album was been built from scratch, enhancing different elements and including new club versions of the more introspective album material. Featuring decks, effects (no laptops) and a live visual show, the album club tour debuted at the legendary SXSW festival in March 2009 and went on to blow minds in just a handful of globe's best clubs.

FANTASIC in 1 word! Looking forward to the STINK sessions @ Ibiza