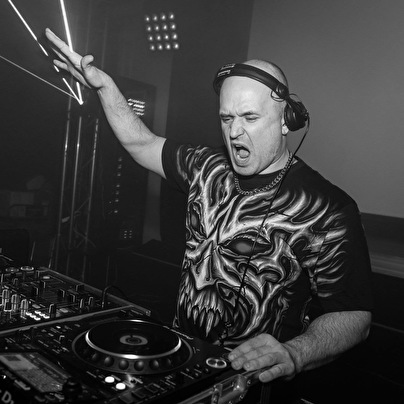 His DJ skills have been showcased through Finland where he, alongside other top Finnish DJs, usually headlines the big gigs. Besides that he also is a regular guest at major events like Defqon1, Ground zero, Decibel, Q-base, Qontinent, Hard island, Wish outdoor, Dreamfields and Dance valley And countries like Russia, Australia, Estonia, Sweden, Croatia, Thailand, England, Germany, The Netherlands and Italy and he was part of the Invasion Tour in The USA doing 20 gigs in 40 nights, coast to coast.

As a producer he is known for releases like Get Hit (together with Crypsis) Hardstyle Matters and Drop 2 Your Knees (together with Chris One). He released his records at different labels, such as Minus Is More, Next Chapter and TiLLT! Records .In May 2013 he joined the Spoontech Records label, as his raw tracks certainly fitted their profile.
And now he signed new record deal in big Holland label, more info soon

With a combination of superb technical mixing and a raw hardstyle sound, Sasha F leaves each crowd begging for more. Sasha F, we welcome as an exclusive member of JD Bookings!

Good work from this awesome producer and dj.­
Sasha F

one of my best dj

Get hit with the motherf**cking real

.
i love this song

and a top DJ/Producer too
Summer feelings i love it

Thanks for playing my track Vodka 2011 at The Qontinent and Decibel Outdoor 2011 !!

It was a plessure to host you man