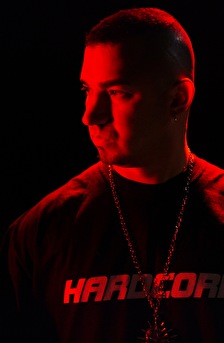 One of these disciples went by the name of Omar Santana. Straight outta the borough of Queens in New York, Omar slowly began to make a name for himself by Ding as part of the Dynamic Rockers crew, putting on jams, sound-battles and creating a solid underground vibe to rock the city with. Through this, Omar started linking up with likes of Arthur Baker as well as the Tommy Boy and Sleeping Bag Records camps. This led on to much studio action as he started producing in a big way and during the '80's worked alongside some of the true sound pioneers like Mantronix, Boogie Boys, T la Rock and Stetsasonic.

The man was now on a proper roll and going from strength to strength by editing and remixing such artists as Public Enemy, Janet Jackson, Simply Red, Quincy Jones and The Rolling Stones. The list is endless... Omar was in serious demand and very quickly became known as one of the "Editing Kings" who would consequently stand the test of time as an inspiration for all future warriors in the trade of cut-up beats and sound.

The time had come for Omar to create an outlet for his material, so H2oh Recordings the came into being, releasing its own brand of Hardcore Flava, the label built up a strong reputation for itself and such was its success that a sister label by name of Tricked Out Recordings was brought into operation to concentrate and add even greater ammunition to the audio warfare in beats that was going on inside his head by setting the agenda for the Hard Hop/breaks sounds in America. A Nightmare in Rotterdam
17 december 2005 Bad meanings was great! My ears are still hurting

Omar fuck it up kid

..rebel to the cause

omar rip it up MF

get straight to it, moshpit, break it down , hardstreet shit

I'm Strictly Hardcore with Nyocore and The Guardian

try this song on youtube omar santana "­hype the funk"­

omar rip it up, motherfucker

i've got the collectors item you guys

stab on your brain and playing with your nose bone

really hope to see you at the next Ground Zero

How shall I rock thee?

dont lie to me

Omar, rip it up

Stories or it didn't happen...