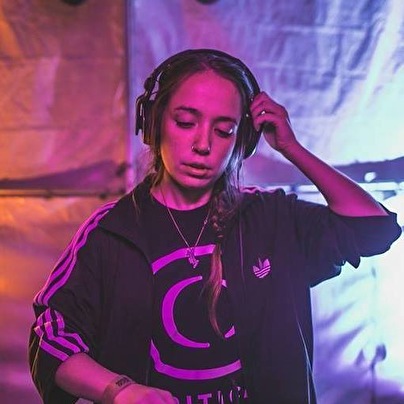 Her sound builds heavily on her roots listening to the likes of Serial Killaz, Bladerunner, Dillinja and Shy FX, but has evolved to incorporate a good deal of the gritty edge she's absorbed through her immersion in the UK's second city. Expect heavy hitting rollers, big basslines and rattling breaks. A junglist through and through though, she comfortably dips into sounds right across the spectrum, drawing crowds in with her flawless selection and innate energy, bolstered with a healthy dose of dubs supplied by many across the scene who've recognised her talent and passion.

This combination has proved magnetic to all around and Frenetic has found herself getting booked across the board; representing at Playaz, performing for 25 years of RAM and tearing up Critical Sound.She also warmed up S.P.Y's Dubplate Style room at Hospitality Birmingham and is back in June for Hospitality's next Birmingham show. She's also gaining recognition in her home city of Bristol, gaining a monthly residency with Shotgun Sessions and representing Rumble in the Jungle at Bristol's legendary Lakota. Meanwhile she's already made her mark into the UK's unrivalled festival scene, playing the RAM stage at MADE festival, tearing up Illusive and mashing up the legendary Hidden Woods at Boomtown for 2 hours of absolute carnage.

What's next for Frenetic?? Alongside some impressive bookings, she's going to be taking her first steps into production, pinning down that Frenetic sound and crafting some firepower of her own. Frenetic has accomplished everything she's done so far within just over a year of being on the UK Drum & Bass circuit and she's only just got started!