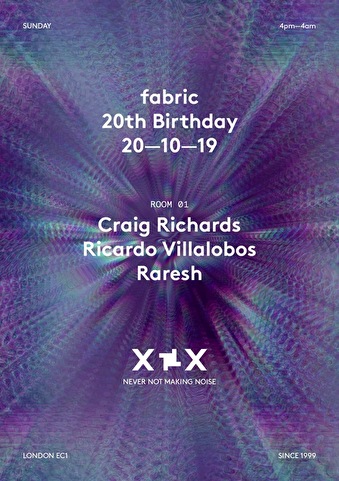 A clutch of our all-time favourites come together to help us toast to 20 years in Farringdon. Our connection with each of these artists needs little highlighting – over the last two decades, Craig Richards, Ricardo Villalobos, Raresh and Voigtmann have all had a hand in defining our sonic identity. Richards has had a particularly profound impact on our sound – having played more than 700 Saturday nights in our space since 1999, he’s been instrumental in shaping our musical direction. Beyond his regular DJ appearances, he’s also had a hand in curating our nights, regularly helping us select the guests we invite to join him behind the decks. Perhaps the most notable of these artists was Ricardo Villalobos, who first stepped into our Room One booth alongside Richards back in 2002. He’s shared a tight relationship with us since then, showcasing his mind-bending minimalist trickery on our Martin Audio rig on a quarterly rotation for the last 17 years. Known for traversing style, era and mood without limitation, his famed Sunday morning voyages alongside Richards have gone down as some of the most memorable moments in our history. Raresh is another prized Farringdon staple. Through his regular Room One appearances – both solo and alongside his [a:pria:r] comrades – the much-loved Romanian artist has long inspired us with his minimal funk wizardry. Once schooled by Villalobos, Raresh famously earned his stripes playing extended hours parties alongside his labelmates in Bucharest, laying the foundations for a mysterious scene that’s since garnered a dedicated following across the world. Voigtmann has also been integral to our story. His record bag – packed to the brim with minimalist techno rarities – has sound tracked our space on countless occasions over the years, and as one of our fresh residents, recently we’ve had a number of chances to hear him in his prime habitat. Outside of his performances with us he also keep busy in the studio, the fruits for which you’ll hear on his genre-leading imprint, Subsequent. For this marathon Sunday session in our XX series, Villalobos and Raresh go head-to-head for a seven hour set, with Richards and Voigtmann flanking. Whenever each of these DJs joins us, we’re used to a mind-bending trip taking in the best in techno, deep house and minimal, all woven together with a nimble flair few others can match. Little-known gems are highly likely; deeper than deep selections are guaranteed. We’re proud to welcome them to celebrate the last two decades with us.

fabric is an over 19s venue
Please remember to bring ID with you. No ID, no Entry.
fabric operates a zero tolerance policy to drugs. Anyone found with illegal drugs will be banned from the venue and reported to the police.