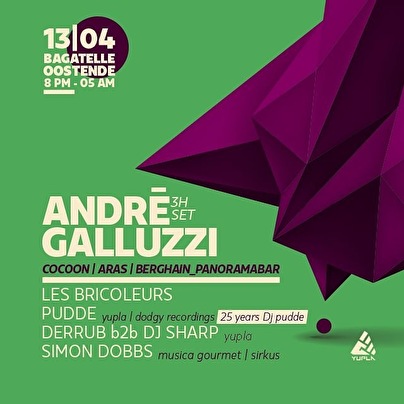 André Galluzzi has been a vinyl DJ for over 25 years, with residencies at Tresor, Ostgut and Berghain. The past two decades have seen him release on labels like Cadenza, Cocoon, Ostgut Ton and Highgrade; also co-founder of Taksi Records and label head of Aras, looking back at quite a bit of history. Born in 1973 in Frankfurt, Germany, André became dedicated to the fascinating world of rhythm very early on. When working as a bartender in a club, he got the chance to fill in for the DJ at the sweet age of 14; an experience that would change the course of his life. Having excelled behind the decks, he became a regular in a handful of clubs in the early 90’s. In 1994 he started working for the renowned record distributor Neuton, where he met Paul Brtschitsch. The musical brainchild of André and Paul, Taksi Records was born a year later. Other musical highlights have included his residency in Berlin’s famous Tresor in 1996. Following that, André moved to the German capital; and with the opening of Ostgut, the parent club of world renowned Berghain, he landed his second residency. After the Ostgut closing in 2001 André released the legendary mix compilation, André Galluzzi: Im Garten and created a new event series called Submerge, running for two years. Famed for his intoxicating 10-hour sets and playing regularly at Amnesia Ibiza, André found his place at the newly opened Berghain. In 2005 he takes up studio cooperation with Guido Schneider resulting in various releases on Cadenza, Cocoon and Highgrade, including their favored track Albertino in 2007. Looking for a new playground, André established the label Aras in 2011, a platform for him and up and coming talents to showcase innovative and unconventional sounds. The same year he released his third mix compilation Stadt Strand Fluss, followed by joint productions with Dana Ruh on Ostgut Ton and Cocoon. One year later André launches the party event We Play Vinyl, a statement of dedication and support for vinyl records. Inspired by his second home base London, several productions followed, such as for Cadenza and Bar 25. In January 2015 he released his debut solo album Alcatraz on Aras. Receiving a wave of incredible feedback, the concept album created a storm of media attention. Subsequently, André alongside Guido Schneider return to Cocoon with a further masterpiece Mario in March 2015, followed by André’s The Nine Remix which has been licensed on Sven Väth The Sound of the 17th season mix compilation in November 2016. Currently, he released his latest EP Submerge on Ovum. Regardless of his busy schedules, he always makes time for creativity and continues to push boundaries to surprise yet another generation of dance floor dwellers.