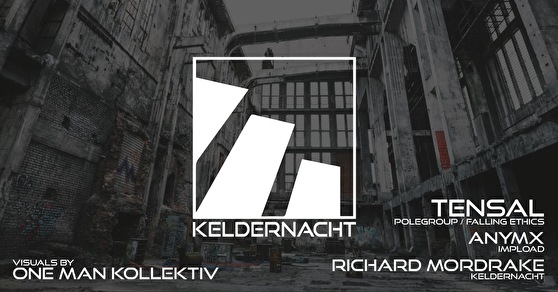 Visuals by:
One Man Kollektiv

Tickets: €8,00: https://partyflock.nl/order_ticket/378585
Limited capacity
18+
____
For our April edition, we invited Tensalofficial (PoleGroup / Falling Ethics) for a 3 hour set in our basement. Support from Impload's Anymx and Richard Mordrake.

With a musical career spanning over twenty years and more than one hundred releases, Héctor Sandoval (one half of Exium) is deep into a new project. Tensal is both his stage name and the label that will accommodate most of this new work, which focuses on a brand of techno that is more modern and cyclic, and based on classic synth lines. His DJ sets explore all facets of techno by alternating different textures and intensities that draw mainly from his own materials. A journey through current techno that will certainly get your attention.

Anymx, born in Porto, nowadays lives in Tilburg where he's known as a resident of the infamous Impload events. At a very young age, he got struck by the electronic music fever and started mixing and producing. Think of dynamic, energetic and hypnotizing sounds which can be said for his sets as well. Anymx knows how to catch his audience attention and taking them on an uplifting musical journey.

Our resident Richard Mordrake (one half of Riot Komplex) goes solo this edition. He will perform a hybrid set, adding more elements and uniqueness to the experience. With two track completed and more to follow Richard has shown real progress in the last couple of months and we're psyched to hear his new setup.
____