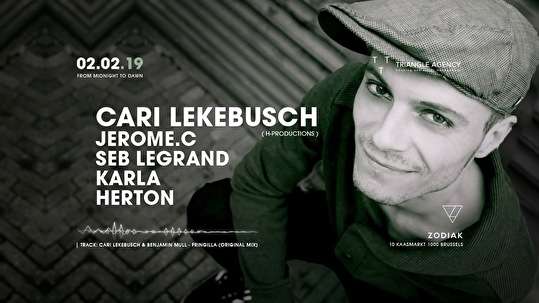 He has been the most well-known techno artist in Sweden for over 20 years, alongside Adam Beyer and Joel Mull. Cari experimented with various sounds under various pseudonyms such as Braincell, Shape Changer, Vector. His tracks appear on labels like Drumcode, Truesoul, Soma...
→ lees meer
This saturday ZODIAK is pleased to host Cari Lekebusch, DJ, producer and label owner of H-Productions.

He has been the most well-known techno artist in Sweden for over 20 years, alongside Adam Beyer and Joel Mull. Cari experimented with various sounds under various pseudonyms such as Braincell, Shape Changer, Vector. His tracks appear on labels like Drumcode, Truesoul, Soma...

| Cari Lekebusch (H-Productions)
http://www.carilekebusch.com
http://soundcloud.com/carilekebusch
A leading figure in the second generation of techno producers to emerge from the electronic music explosion of the early 1990ʼs, Cari Lekebusch has sustained a twenty-five-year career in music through an unwavering commitment to quality and an unquenchable desire to constantly move things forward.
Always enjoying inspired periods of productivity, Lekebusch releases his sound architectures on a consistant basis. Received with universal praise from press and peers alike; the relevance to the modern music market of his twentieth studio album in his twenty plus years as a recording artist has proven, that Cari Lekebuschʼs reputation as an enduring and proactive force within the techno community is rock solid; maintaining his profile within a scene he was partly responsible for creating.
Credited as being the figurehead of the globally influential Swedish Techno scene that subsequently spawned internationally recognized names such as Adam Beyer, Jesper Dahlbäck, Alexi Delano and Joel Mull, Par Grindvik, Lekebuschʼs standing as a studio innovator and production authority is well documented. He has borne many pseudonyms over the course of his illustrious career to date including Fred, Mr. Barth, Braincell, Shape Changer, Vector, and The Mantis as he has experimented with sounds across a range from techno to electro; releasing on both seminal techno labels such as Drumcode, Truesoul, Novamute, GSR, Soma, Primevil, Masters of Disaster, Fine Audio Recording, Harthouse, Turbo, Mote Evolver, 430West and Tresor, as well as cutting edge new- school imprints like International Sound Laboratory, Mindshake, BOND, 8 Sided Dice, Sleaze Records and countless more.
More recently, Cari has focused some of his output on his own H-Productions label. The label has been releasing its distinctive brand of ever-so-slightly left-of-centre techno since 1994, however after 2011-2013 saw the beginning of a new way of working for Lekebuschʼs imprint. Motivated by the dual inspirations of the labelʼs original name – Hybrid Productions – and the brands long legacy within techno, a concept was born which brought together a select group of artists whose musical style complimented one another and whose heritage matched that of the label. This deliberate hoarding and nurturing of creative forces within a group dynamic has breathed new life into the label; allowing Lekebusch the creative time and space to approach his own work in a less pressurized environment and provided a revitalized and resurgent label structure within which H-Productions artists can grow.With an artist roster containing The Advent, Jesper Dahlbäck, Joel Mull, Alexi Delano, Tony Rohr, Industrialyzer Nima Khak, Petter B, Gayle San, Chris Colburn, Bryan Chapman, and Hans Bouffmyhre, the H-Productions concept is most openly expressed via the labels creative production projects. So far notching up artist ep’s and albums from Cari Lekebusch, The Advent, Alexi Delano and Tony Rohr as well as imaginative album compilation projects such as the Mutations, Rejuvenations, Recombinations and the Archeology series; which each in turn explore a particular theme, whether it be challenging the labels roster to make new tracks out of the parts of earlier releases; remixing classic tracks from the back catalogue; joining together to create original collaborations or delving into the artists own personal production libraries to compile their own collections of historical influences.
Coining the term ʻSound Architectʼ to describe his work as a performer, Cari Lekebusch is an instinctive and imaginative DJ and space traveller with a distinctive style that has earned him a loyal and fanatical fan base. Invited as a regular guest to the premier techno shows across Europe, Asia, North and South America, Cari is most at home playing closing sets that snake between full-on peak-time exuberance and ever so slightly off-the-wall weirdness. When not playing solo Cari can be found guesting or leading the line at H-Production showcase events at Berghain and Tresor, Berlin; Fabric, London; Melkweg, Trouw, Awakenings, Amsterdam; Berns, Stockholm; Komplex, Zurich; Treehouse, Miami; Forum, Medellin; Marco Polo, Slovenia; Elektroküche, Cologne; Club Lehmann, Stuttgart; Button Factory, Dublin; Doornrosje, Nijmegen; Universal DOG, Lahr and Free Your Mind Festival, Arnham.

| Seb Legrand (Non Peut-Être / NPE - Plunk Recordings - Volute Records)
https://soundcloud.com/seb-legrand
A few years after commencing dj'ing at the age of 12, Seb Legrand began playing at many clubs in his native town, also organising parties that gave him the opportunity to play in countries like Spain, Holland, Germany and Croatia to name a few.
Discovering minimal music not far down the line progressed him to play more groovy and funky sessions.
After 5 years on the djing scene he wanted to express something more personal so he advanced to learn music production.
Now living in Brussels making the finest dance music, you can catch his own tracks in his sets and on various labels including 1605, Berlin Aufnahmen, Nell rec, Parallel music ,Yoruba Grooves …

| Herton (Blackwallrecord - ZODIAK)
https://soundcloud.com/herton-bwr
Born in Kinshasa, Herton came to Brussels 11 years ago.
He discovered the local scene through The Wood Brussels where he made his debut as a Dj on New Years Eve 2016.
After a few years digging into more alternative genres such as drum and bass, Herton sets his mind on minimal and techno, making those two genres the base of his musical aesthetic.
But it all comes to fruition in 2018 when he officially joins the programing team at Zodiak nightclub in brussels where he also has a residency.
During his sets, Herton shares a mix of mysterious moods and balanced patterns, who will projecting you to hip-pop from rock even jazz, while immersing yourself in a captivating atmosphere , that make it very hard to leave the dancefloor and keeps you going until the late morning hours !