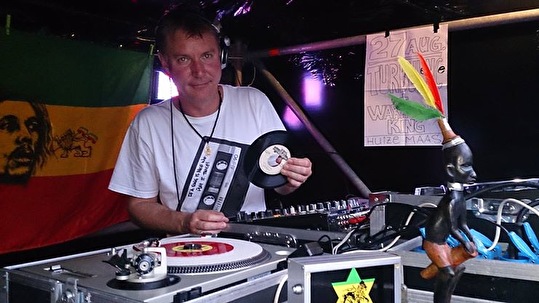 Last year he produced a Reggae 'Mash-Up' album with 12 remix tracks.
A MashUp-tune is where you put an acapella on a total other riddim, for instance; Buju Banton (vox only) meets The Wailers (riddim only)

Steely "The Chuner" is resident Dj for Poppodium Club VERA (Groningen, NL.) where in 1997 he founded a Dj-Collective called "Dub Inferno Sound" that gave some men (almost monthly) an opport-unity to Dj or 'chat pon the mike'. Dub Inferno has guest Dj's, played at 'Lowlands' and '2.7's Splash' (both NL.), with still every Dutch Queensday 'SoundSystem' Outdoors on the street in front of the VERA Club.
He spinned at 'nuff 'nuff places, parties and festivals (RastaPlas NL., ReggaeRuigoord NL...) In 2007 'RoundBeat HiFi' played the whole weekend on the mainstage a wicked set as the only Dj in front of 40.000 swinging listeners at the biggest Reggae-event in The Netherlands (Reggae Sundance Festival, Eindhoven)
Through the years Steely supported realy a lot of Reggae-artists with his 'RoundBeat Sound': Yellowman, Ziggy Recado, Cocoa Tea, Lee Perry, Burning Spear, Frankie Paul, Sizzla, Bunny Wailer, Turbulence, Eeka Mouse, Pat Kelly, I Jahman Levy, Tristan Palmer, The Itals, Ethiopian, The Heptones, Shinehead, The Ska-Talites (4), Marcia Griffiths ... just to name a few.

Steely is the producer/manager for the Reggaestage/tent at "The Gideon Festival" (Groningen, NL.)
From 1982 on till now, he made hundreds of posters & flyers by hand, toured years with Dutch Ska band "Jammah Tammah" and won a Dj-contest in 1996 !
He also played several times (8) at the 'Dance Valley Festival' in the ChillOut-tent a mix of Chilly-TripHop-DownBeat-Dub riddims in the mix.
For some years Steely is also a member of the DJ collective ''Start the Freakend''.

For over 12 years, DJ Steely has his own internet-radio show at www.nauticradio.net titled 'Jamaican Style'. (under construct?)
Playing in the dance, RoundBeat HiFi will bring you more NuSkool-Reggae, JamaicanDance and U.K. Dub, but on the radio he will spin mostly Revival Music with listeners from all over the world. (Check the cam & chat)

Since 2010 he invites guest djs/sounds @ the Blazin'Fyah Partys, every first friday of the month in a local bar in his HomeTown.
In 2012 he started the ''Dub Salute'' band but sadly left a year later,,